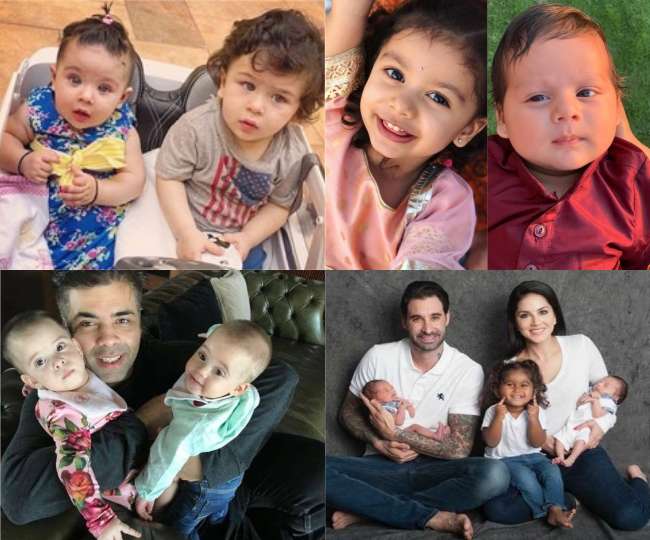 Bollywood’s little stars are already making noise on social media sites and hitting headline with their cute and starry attitude. The B-town parents are happy letting their little munchkins make the noise and stay in limelight. Check out these cute star kids hitting the headlines in 2018.

Yes! The article is sure to begin with the little Pataudi since he is the biggest star kid right now. He is frequently seen making cute gestures and talking things to camera persons who are all crazily waiting for him wherever he goes. Be it his first day at play-school or his sports day or him attending other kids’ birthday party, camera persons make sure to capture his glimpse as much as possible. Even if he just utters ‘hi’ to camera persons, they make sure it hits the headline.

Daughter of Bollywood hunk Shahid Kapoor and Mira Rajput, Misha Kapoor is nothing less than Taimur. At just 2 years old, Misha is also seen in news often with one cute moment or another. In 2018, Misha started going to school and it was a hit news. She was seen walking with her mom Mira Rajput in the school premises and the paparazzi couldn’t help but capture her in her cherished moment.

Well, Bachchan name is enough to guess that she is of none other than Aishwarya Rai Bachchan and Abhishek Bachchan. Aaradhya is often seen attending functions with her gorgeous mom Aishwarya. Be it a wedding party of their relative in Mangalore or red carpet event at Cannes, she is seen beside her mom every now and then, looking every bit beautiful as her mom. Recently, she was spotted at Isha Ambani and Anand Piramal’s pre-wedding ceremony with her parents in a traditional orange lehenga.

Aaradhya’s best friend Azad Khan is son of Aamir Khan and Kiran Rao. Even Azad is seen at birthday parties of his little friends and sometimes even sharing an awkward hug with his close friend Aaradhya. He already seems sharp like his father Aamir and is seen in media with his parents often.

Inaaya is Taimur Ali Khan’s cousin sister and daughter of actors Soha Ali Khan and Kunal Khemu. Just like Taimur, Inaaya is also seen in news every now and then. Be it her vacationing with her parents or celebrating a half birthday with them or celebrating Raksha Bandhan with Taimur, this cute little princess is often seen calmly enjoying everything.

Karan Johar had twin kids through surrogacy in 2017, Roohi and Yash. His adorable kids are often visited by Bollywood stars at their home and they click selfies with them. From Kareen Kapoor Khan to Alia Bhatt, Deepika Padukone, Shar Rukh Khan, Gauri Khan, Siddharth Malhotra many other stars are seen playing with Roohi and Yash.

Viaan is the adorable star son of Shilpa Shetty and Raj Kundra. He is seen at the birthday parties of his friends. He also hosts his own. Viaan is sometimes seen appearing on ‘Super Dancer’ show, where Shilpa is a judge.

Shah Rukh Khan’s lovely kid AbRam is no less than his dad. at just 5 years now is seen waving at reporters. He also performs skits at his school, posing with his elder sibling and what not. This little munchkin hits the social media knowingly or unknowingly.

Akshay Kumar and Twinkle Khanna’s endearing daughter Nitara, is just like her mom. She has got all the good looks of her mom as well as her bindass attitude. Nitara’s pictures of her holidaying with her parents and chilling with her close friend often make rounds on social media sites.

videos of adorable moments with his , Salman Khan keep flooding social media sites every now and then. He is the son of Salman’s sister Arpita Khan and debutant Aayush Sharma. is frequently seen with the Khan family spending time and having fun with them.