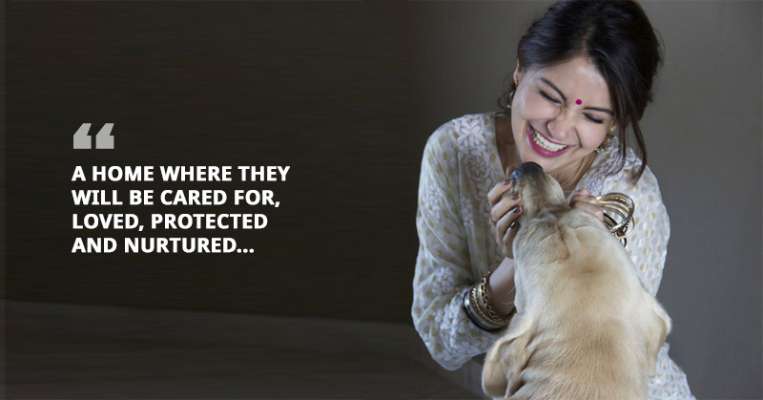 Last year on her 30th birthday on 1st May our beloved “Pari” Anushka Sharma revealed her beloved plan “to open an animal shelter”.  Anushka Sharma’s animal shelter will be established on the outskirts of Mumbai in Dahagaon village in Shahapur.  Anushka said “ I’m building an animal shelter just outside Mumbai – a home for those animals that are stranded, left to fend for themselves, have to brave harsh surroundings. A home where they will be cared for, loved, protected and nurtured.”

Anushka Sharma is an animal lover and Anushka animal love not a secret. She has expressed her love towards pets on many occasions and she is deeply involved in making the world a better place for them. Anushka Sharma on many social platforms admitted that she has changed a lot after her pet dog Dude came to his life.  She quitted eating meat and all non-vegetarian food as Dude didn’t like the smell of non-veg food.

How this Love Started

Anushka Sharma was already a pet lover but her love for the animal taken a whole new dimension when she met Dalai Lama. After meeting Dalai Lama his words inspired Anushka Sharma to do something for animals which resulted in the animal shelter and veterinary hospital. Anushka Sharma wrote on a social platform that Dalai Lama told her “Life is as important for pets as for human being. As human being feel sadness, happiness and want that every human being should live happily the same happen with animals also.”

Anushka Sharma was planning to open an animal shelter and veterinary hospital from last 3 years but her dream of animal shelter was not easy. She purchased land in Dahagaon village of Shahapur area but it stuck in red tape and legalities. The land was defined as agricultural land and as per Indian law, only any farmer can buy any type of agricultural land. After 3 years of long battle, the land got no objection for the animal shelter and veterinary hospital from Thane Collector’s office.

According to sources, Anushka is going to fully devote her time for this animal shelter and veterinary hospital. She has not signed any movie recently and going to produce a movie for Netflix. As per sources, she is also going to build a bungalow for her father there who will take care of Anushka Sharma’s animal shelter daily activities.