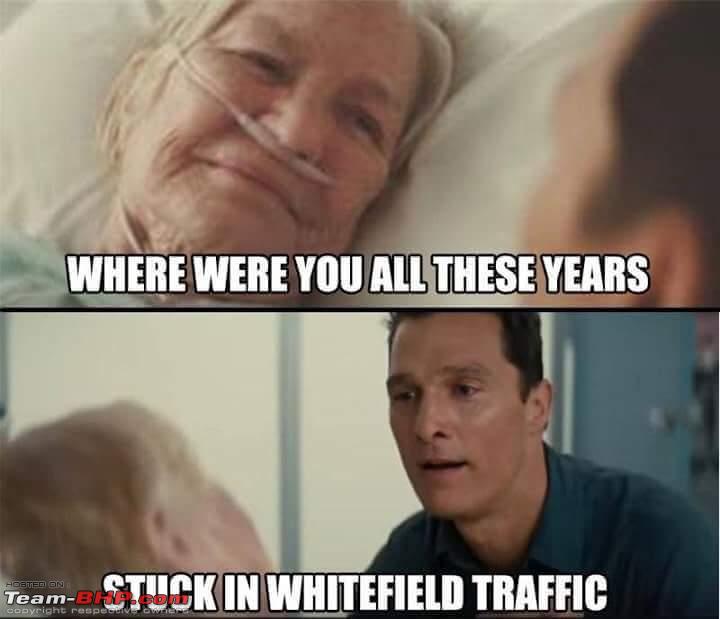 Talking about Bangalore, how can we not talk about Bangalore’s traffic. The rate at which this city is developing at a faster rate is increasing it’s traffic. On an average a resident of Bangalore spends more than 240 hours being stuck in traffic jams each year.

Few days back was in town Jeffrey Archer, a popular British author who had come Bangalore for the launch of his new book and even he had a taste of the most talked about topic of Bangalore, its traffic. Addressing his fans at the book launch event, he went further speaking about the city’s traffic where he said, “A woman walking on the pavement overtook my car eight times and my car overtook her eight times. Two more times and we would have been engaged.

Many a Bangaloreans didn’t get amused at this humour of the author because this is what they have to undergo daily and being stuck in traffic daily is really a pain in the ass.

On being asked about the traffic jams, the transport and traffic expert Prof. MN Sreehari went ahead saying, “The traffic is definitely a mess here, it’s faster to walk than drive.”

Pawan Mulukutla, a member of non-profit World Resource Institute said that the traffic which used to move at a speed of 35km/hr in 2005, started moving at 9.2km/hr in 2014. Leave the talk about peak hours in the herat of the city, the Outer Ring Road, its just 4-5km/hr. How slow the traffic has started moving you can make an idea with these figures itself.

The question is why is the  Bangalore traffic so deadlocked?

The only answer that justifies this question is the rapid and unplanned growth of this IT Hub of India. Due to the technological growth of this city, it has emigrants from all over India for better lifestyle increasing the population from 5.6 million in 20014 to 8.7 million in 2011 to 11.5 million presently.

Giving answer to this question Mr. Mulukutla said, “We have only 6,500-7,000 public buses to carry 45% of the city’s traffic. The Metro construction has been very slow. Work on the first line started in 2007 and so far only 28km of the 42km line have opened. Work on the second phase has not even begun. And deadlines keep getting pushed.” Thus, leaving the half of the population dependent on private vehicles further leading to increase in traffic.

Another major reason for this congestion being the parking of vehicles everywhere and the footpaths being taken by hawkers and vendors leading the people to take the road for walking.

Prof. Sreehari believes that there is a requirement of a firm decision from the authorities at the earliest to curtail the no. of vehicles being registered daily in the city and stricter rules for giving license.

What is required is more increase in the no. of public buses and building up of few flyovers and rapid construction of metros. This could make a change but what Mr. Ravichandar feels is “it is expected to get worse before it gets better.”

1 thought on “While Government Is Running Ads Glorifying Itself, Bangalore Has Gone From Bad To Worse In Past 5 Years”