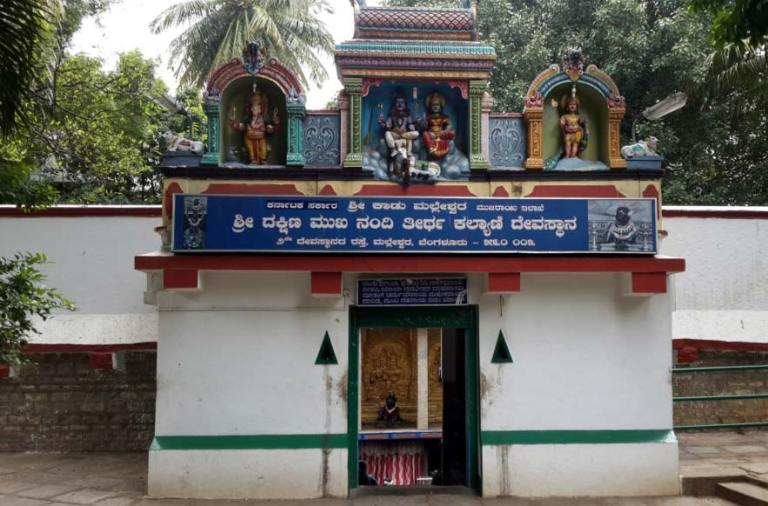 Sri Dakshina Mukha Nandi Teertha Kalyani Kshetra, commonly known as the Nandi Teertha, Nandishwara teertha, Basava teertha or Malleswaram Nandi gudi is one of the oldest Shiva temple of Bangalore, some 7000 years old. It is located in the 17th cross street Mallerwaram, in front of the Gangamma temple, diagonally opposite to the Kadu Malleshwara temple.

When and how was this temple constructed is still a mystery, but this is for sure it is some 7000 years old. In 1999, the temple was discovered by the localoids when some construction work was going on in the area. On the ground being dug, the entire structure along with the Shivalinga popped out of the ground.

When the Archaeological Survey of India team dugged further deeper, they found a central pool of water with granite steps and pillared mantapas surrounding it. All this looked so perfectly fine that no one could say that this has emerged out of no where or that it wasn’t actually constructed with proper planning. 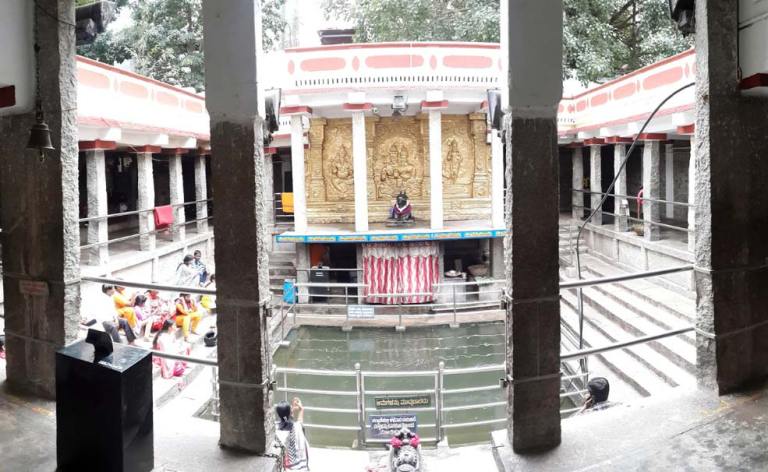 Though there is no exact estimate of the construction, the Archaeological Survey of India predicts it to be minimum 400 years old on the evidence of carbon dating. The temple doesn’t has any documented history of its but is known to be 7000 years old.

Along with the Shivalinga was discovered a Nandi statue from whose mouth water continuously drips out, bathing the Shivalinga. The source of this spring hasn’t been found out yet but considering the water to be holy it is collected in a huge pond in the middle of the temple known as “Kalyani”, meaning temple tank in Kannada.

This is the mystery of this 400 year old temple (with some structures in the temple dating back to 7000 years) as the source of water flowing from the mouth of Nandi has still not been found.

There has been a speculation that this water comes from the Sankey tank but nothing concrete has been proved yet, with this remaining a mystery.

In order to see this miracle with eyes, one must visit this temple on their next trip to Bangalore. There are many other temples in this region, Malleswaram.