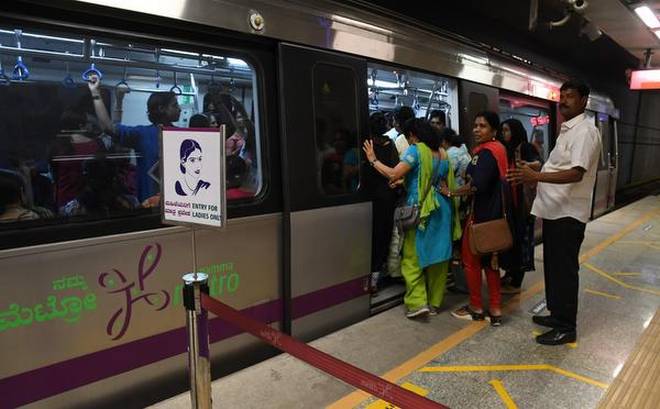 Every railway station, airport, cinema hall, or any public place has a list of items that are banned. The list includes radioactive substances, explosives, knives, firecrackers and many more. Recently, ‘whistle’ has also made it to the list in Bangalore. Security persons on Namma Metro platforms have been instructed not to use whistles on the platform.

These security people have a number of duties which includes, controlling the crowd, taking care of the rules to be followed on the station, taking safety precautions, implementing rules like priority entry and exit for women in the first two entrances, ensuring that no one crosses the yellow line and so on. One more thing that they will have to take care of from now is no use of the whistle. The Bangalore Metro Rail Corporation Limited (BMRCL) has introduced a new policy of ‘no whistle-blower’. The main reason behind it is, recently the security persons informed that some passengers were complaining about the whistle noise getting irritating. The BMRCL authorities cited that the crowd behaviour had improved over the period of time, reducing the workload of the security people, so they could do away with the use of the whistle.

They said that initially when the people were unaware of the rules to be followed at the station, the use of whistle was necessary. An official said, “But over time, people have understood them. A majority of the travellers are regulars who take the train and use the same stations almost every day. The guards had to use whistles a lot earlier. But now, people are also aware of the dangers of going close to the track, of the need to maintain a queue, etc.” However, the guards do not seem much happy with the new policy. They said that they almost feel unarmed without a whistle. One of the security guards, from the Purple Line station, said, “Earlier, we could control someone at the other end by just blowing the whistle. Now, we have to yell loud enough to surpass the other noise to be heard and understood.”

Expressing his discontent with the new policy, another guard said, “Just telling someone verbally simply does not have the desired effect. When we used to whistle, everyone would pay attention to us. Now, we have to single out people and tell them what they are doing wrong. Some of them just brush us aside.” Though it were the passengers who had complained about the noise of whistle becoming irritating. Some of them were not agreeing with the new policy. Sarala, a regular passenger said, “Especially with children, the sound of a whistle works better than someone telling them to stay away from the yellow line,” It will be some time before the passengers, as well as the security persons, get used to not using a whistle on metro stations in Bangalore.