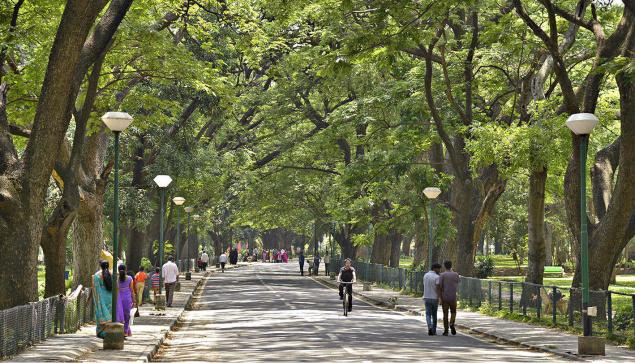 Bangalore is well known as the city of gardens, as walking through the city we can see parks in each step we take, however, the name of the city is the anglicized version of Kannada Bengaluru, which comes from the word Bendakalooru, which means the city of cooked beans.

A prominent place in the city is the Lal Bahg Gardens, an authentic botanical garden in the heart of the city, with the best red roses that can be seen in the world. Especially recommended when there are floral exhibitions, where everything is an explosion of floral unparalleled. It contains numerous species of trees of all kinds, tropical plants.

Also known as “Red Garden”, it is recognized as the garden or main park of Bangalore. This was ruled by the Mysore ruler, Hyder Ali.

One of the main attractions of this garden is its famous glass house that hosts a large exhibition of flowers every year. It also illustrates its visitors through a lake and an aquarium. Hyder Ali ordered to build this garden maintaining a limit with the Mughal gardens and in this way the two gardens were gaining recognition. These two gardens were established by Ali himself, and at the same time, his son added a horticultural part of them in each import of trees and plants from several countries.

The park has some little-known species worldwide. These were brought from different parts of the world; Persia, Afghanistan, and France. For these, an irrigation system is used that covers all the areas of the garden, the lawn, the flowers, the ponds with lotus flowers and the fountains.

In this park, you will find one of the most popular rock formations in the world. It is said to have more than 3 billion years on earth. It is recognized nationally and internationally and has become quite attractive to tourists and citizens of Bangalore.

This park is considered as “the lung” of Bangalore. This is located in the central area of the city, in the heart of Bangalore. It was created by General Richard Sankey, and when it did, only an area of 0.40 km2 was prepared, taking into consideration a possible future expansion of about 1.2 km2.

The distribution of the garden is based on a varied flora and plantings for a light fauna. In addition, it is surrounded by some buildings with very witty, original aesthetic designs and also statues of famous people.

Previously, this park was known as “Meade Park”, named after its first developer; Sir John Meade, interim commissioner of Mysore in 1870. Shortly afterward he was renamed by another commissioner of an older time, Mr. Marcos Cubbon.

When you look at the garden well you can see the creative way in which the flowers are distributed, the bushes of trees, areas of bamboo, with extensive herbs and flowers through the monuments that cross their limits imposed by the Department of Horticulture.

This park has many green areas that are passable, even, these areas are demarcated or marked as trails to tour the park. Generally, the people who frequent these zones are the passers-by who walk early in the morning or the scientists who wish to realize some studies of the plants.