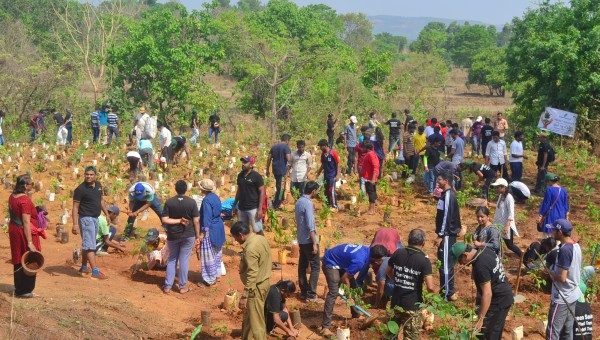 As we know, the modern age world has built up into large MNC’s and things which are causing much of the pollution. In such cases, global warming is inevitably at its peak and measures should be taken to stop such issues at world level.

Meanwhile, there is one particular team in Karnataka which is bringing new lives in the form of plants, which is indeed a blessing. On their 100th consecutive Sunday of work, they planted a whopping 1,580 Trees in one go which is quite a magnificent thing. Talking about the location, the trees were planted at Rajgoli which is in Belgavi.

If you visualize the participating criteria, people came at full force in this peaceful operation of planting trees. Regarding numbers, over 425 volunteers including the students from GIT Kannada Balaga, Gogte College, KLE Society’s MSS College of Engineering, IMER & Love Date School and several other members of the Body Works Gym group participated in this regimen with full joy and excitement.

Visualizing such a strong response from the citizens of Kannada made us feel proud, and their love for plants was the primary key factor which drove them to do this lovely work.

Regarding the uninitiated, team marks on the road by Miyawaki method which is named after the Japanese botanist & plant ecology expert, Akira Miyawaki. As a person, she has excelled in natural forests and is providing information to millions of people all over the world.

As far as the technique is considered, it is a revolutionary technique to create a marvelous forest in less than 20 years. If we will go by the usual regimen, this process will take centuries and will surely be a time-consuming process.

Word of Mouth by the Team Members

In an interview, the team members said, “This is the fifth mini-forest we have created. The survival rate has been between 70-80 percent. This is an ideal site for Miyawaki plantation. We were expecting about 300 volunteers, but at least 425 volunteers turned up. Since we have learned the method well, we were able to complete planting of 1,500 saplings in two hours. We are happy that we can understand the process better and make things happen faster.”

Talking about the achievements; this team has achieved beyond any words. Since April 2016, this team has worked relentlessly hard towards their goal. All in all, they have planted 10,276 saplings which is a much-needed number in this intensive global warming based world.

New Set of Achievements on the Way

From March 2018 to March 2019, they have set a target of planting 10,000 samplings which will further glorify this man-made world into a bit god’s grace one. Overall, everything on this team has been up to mark. Ranging from team strength, to their working capabilities, everything has been quite phenomenal.

For much further, planting, they are insisting the government for giving them at least an opportunity to samplings for every 10 trees which are cut down every time.

1 thought on “For 100th consecutive Sunday, This Team Has Bean Planting 1580 Trees Every Sunday”