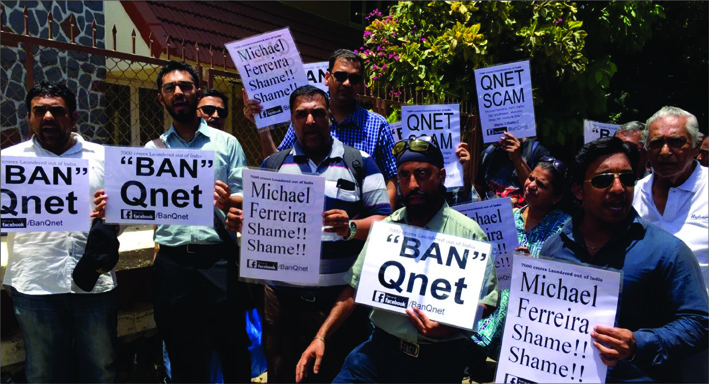 BENGALURU: On Saturday, a protest broke against QNet, a direct selling and marketing firm. Nearly 70 people lodged their protest at freedom park and demanded action against the firm. The firm has been alleged to have deceived more than thousands of investors throughout the country. Investors were duped into investing in a multi-level marketing scheme by the firm.

QNet is accused of using pyramid scheme for vending its products. It garnered investments by guaranteeing a high rate of interest. The people who were cheated by this scheme and have lost their money include businessmen, doctors, MNC employees and engineers. According to protesters, to recover their own principal amount that they invested, they were pressurised to convince their acquaintance to invest into the firm.

A private company employee, Pratik K who lost an amount of 2 lakh in the year 2016  said that he took a personal loan to invest in the firm and is still paying its EMI.

He added that nobody in his family knows about this. Talking about the first meeting he said that he was introduced to few of company’s senior executives by his sister’s childhood friend. On the first meeting, a magic script was given them and everybody was told that the senior executives will soon have a meeting with them to discuss the scheme and the company. The company made people believe that this was going to be an investment of a lifetime for them. It manipulated the people and created a sense of dissatisfaction in them about their present income. They were cajoled to invest a huge sum of money into the firm.

The company did not disclose the details of the investment and the company to the investors.

A couple who works at private firms, Anupam Singh and Priyanka Rani said that they came to know about the company QNet through few relatives but since the truth has surfaced, those relatives could not be traced. They have lost around a sum of Rs 10 lakh in the year 2016. They said that this company is putting lives and relationships in jeopardy.

According to sources each investor had a loss from two lakh to ten lakh. A total sum of Rs 1.28 crores was duped by the firm.

Till now about 25 cases have been lodged against QNet at Ulsoor police station. But the progress in the probe has been very slow and people are now demanding a CID probe into the matter. The headquarter of the company is located in Hong Kong which is making it difficult for police to get deep into the issue.

The company has been active in Bangluru for past seven years. The issue surfaced in 2016 when the firm failed to keep its promise of huge return on investments. Since the year 2016 few representatives of the company have been apprehended. In November 2017, the Cyber Crime Division of CID also published a note on its Facebook page to alert citizen against the scam.