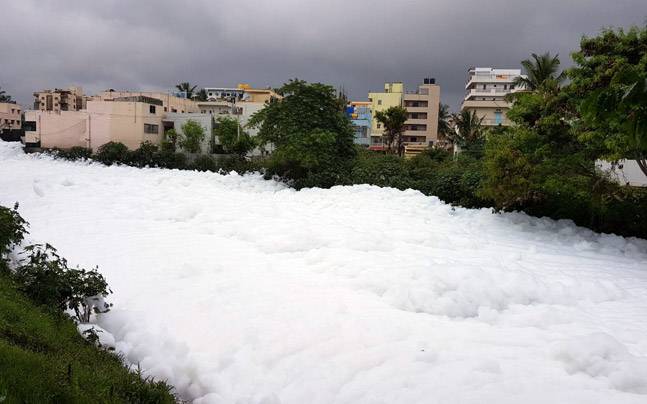 Bellandur Lake, spread over 906 acres in southeastern Bengaluru, is the city’s largest lake. Until three decades ago the lake nurtured a variety of birds, fish and insects. It was also a famous picnic spot with boating and fishing site. But today it has become a severe danger to the environment and the people.

The rapidly increasing rate at which the population of Bangalore is growing in past two decades has made this lake a dumping area for domestic and industrial waste. It is so highly polluted that once a famous picnic spot has now become an infamous lake for the gigantic clouds of froth that accumulate on its surface. Recently, on January 19 for reasons still unknown nearly five-acre area of the lake bordering an Army property caught fire. After the hard work of around 5,000 Army and fire service personnel, the fire could be extinguished after seven hours.

According to the views of environmentalist A N Yellappa Reddy, “the deadly chemicals and large amounts of methane in the lake may have resulted in an accidental or small fire spreading over a vast area.” Well, this was not the first time the lake was on fire. It has witnessed occasional fire on its surface as well. According to the scientists, the pollution in the water is the reason behind the fire.

Due to the growing dangers and deteriorating condition of the lake, the Siddramiah government allocated Rs 50 crore in the current budget for its rejuvenation. However, just the allocation of money would not solve the problem.

Gautam Dayal, a Class-9 student who lives near the lake has taken an initiative to create awareness about the condition of the lake and bring forward, especially the youth to save it. Gautam says, “I live in front of the lake. I smell the fumes coming out of the lake every day. I see what is happening to the lake – it happens right in front of me, every day. I’ve always wanted to do something about this.” He has created a website, that gives all the information about the lake.

When he started researching about the lake and the reason behind its condition, he realised that all the information was scattered. There was not any single place where he could get all that he wanted about the lake. So he created the website. But he also adds that “It’s not gathering information that’s the challenge. I want to build a community around the place by creating this website. I want to interact and talk about this more and more so that there are millions of hands coming together to work for the rejuvenation of the lake.”

Another thing that is bothering this 14-year-old is that not enough youth are coming forward for the cause. He says, “Everyone who is talking about the lake is an elder. I do not see youngsters [doing this]. The condition of the lake affects us too and youngsters need to come forward.” Through this website, Gautam plans to work for the save of the lake. He has already started the conversation and plans to do more interviews with the experts. Gautam is also planning to hold a photography competition. He thinks that by such events they can spread more information and bring a lot of people to talk about saving Bellandur Lake.

I used to love bird-watching when we lived in Sadhasivanagar as Sankey tank was nearby. But since we moved to Bellandur, the sight just hurts,” says Gautam. Talking about the idea of creating this website, he said, “I worked out this idea through ‘1Million 1Billion’ (1M1B) initiative, which taught us many things such as problem-solving, researching, speaking and presentation skills. That is when I created this website as part of my project and promoted this in my school as well.”

While expressing his thoughts on the initiative taken by Gautam, Manav Subodh, co-founder of 1M1B, said: “What we see in Gautam’s idea is the skill of an influencer, trying to bring people together for a cause. That is what we try to do [with students]. Now, if he gets selected, he will be one among the top 3 to present and represent the country in addressing environmental issues.”