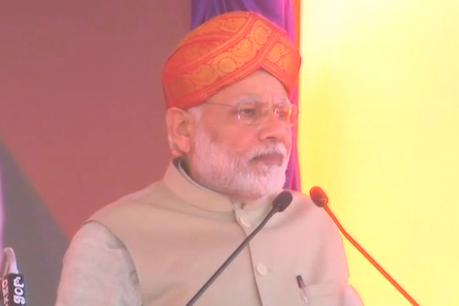 Prime Minister Narendra Modi while addressing a rally in Chief Minister SIddramiah’s hometown, Mysuru pulled down on the ruling government of Karnataka. The state will be facing the assembly elections this year, and BJP is on the hunt to paint one more state saffron. While addressing the rally, Modi attacked Congress saying that it was only spreading lies.

Not missing the opportunity to pull down Siddramiah, the PM appealed the people to question Congress over their rule for several decades. Congress has been ruling the state since independence with some other parties to take over in between for some time. BJP with the goal of making India a ‘Congress Mukt’ country is on the run to destroy the party by all means. Attacking the Congress in Karnataka, Modi said that, corruption in the state is growing every day. He added that he was receiving many calls after he levelled a “10 percent commission” charge against the Siddaramaiah government. Further pulling down on the party, he said that whenever Congress was ruling, it was a barrier to the progress. He also added that Congress was at the exit gate and the party only cared for power and not about the people.

During the rally, the PM questioned the people if they wanted a commission or a mission government. “I can understand the anger of the people of Karnataka. Do you want a commission or a mission government?” he asked. This is the second rally of Narendra Modi in poll-bound Karnataka. In his first one on February 4, Modi had said that SIddramiah government was making new records in corruption and soon it will be out of power. “Every day, a new scam, new corruption and new allegations are coming up against their leader, ministers, or some government schemes,” said Modi.

He also accused the Congress of spreading lies repeatedly. “They think that by telling lies, repeated lies, loudly and continuously spreading lies not for a day but for months on end, wherever they go, the people will believe them….the country will never accept your lies,” he said. During the rally, the Prime Minister announced a six-lane 117 km Bengaluru-Mysuru national highway project which would be costing Rs 6,400 crore. He also spoke about setting up a world-class new satellite railway station at Mysuru for which, around 800 crores will be invested.
However, after the Mysuru rally, the questions that are on the minds of many is, Is Modi’s charisma fading away? Will, not having a live translator for his Hindi speech going to cost him in connecting with the people of Karnataka in the upcoming Assembly Elections? Also, another thing that could be risky for BJP in Karnataka was the absence of some of its popular leader from the state. The fact that the party do not have any leader from the Christian community, which has a considerable share of votes in the state, can also be a cause for concern.

Karnataka Assembly Elections are likely to be held somewhere around April-May 2018.