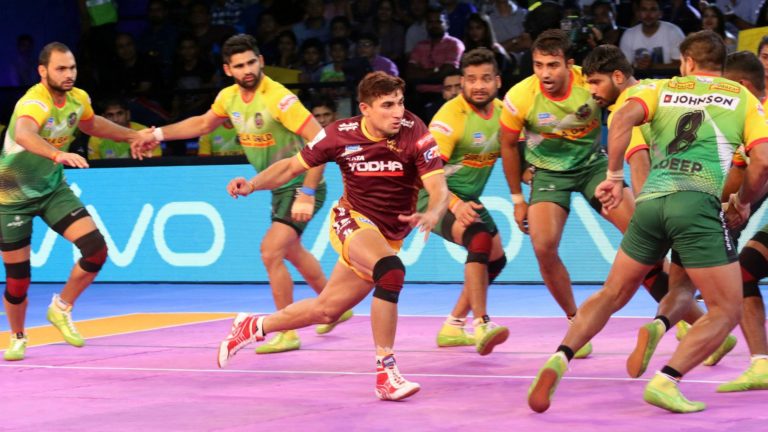 Patna Pirates won the toss and selected choice of court, U.P. Yoddha raid first. After 14 Minute, with successful and unsuccessful raid score on the table 10-9 and Manjeet scored 2 points to bring Patna Pirates in a game as they were nearing all out. But after 2 minutes in game U. P. Yoddha all out with score 16-10.

At halftime, Patna Pirates lead by 2 Points against U.P. Yoddha. Shrikant Jadhav raids successfully and it’s a super raid, 6 points for Yoddha to level the match 24-24 after Yoddha took a review and Patna Pirates all out at this moment.

Pardeep Narwal raid successfully and it was a super raid, with this he leveled super raid record with Rahul Chaudhari in PKL history and score on table 31-28.

Patna Pirates with 7 point lead, Yoddha all out for the second time and score on the table 35-28. As Patna Pirates scoring points every minute.

2nd match of the day: Haryana Steelers vs Puneri Paltan

Haryana steelers won the toss and selected the choice of court. After 15 minutes score on the table was 7-13 and Navin failed to score a point and with this Haryana were all out.

Puneri Paltan lost a review and at halftime, Haryana Steelers trailed against Puneri Paltan with the score on the table 11-19.

Before 4 minutes of the game, Puneri Paltan’s Nitin Kumar raid successfully and with this Haryana steelers were all out the third time with score 25-42.

A jaw-dropping performance by Nitin Tomar ensured he was raider of the match and secured a win against Haryana Steelers with the score on the table 27-45.