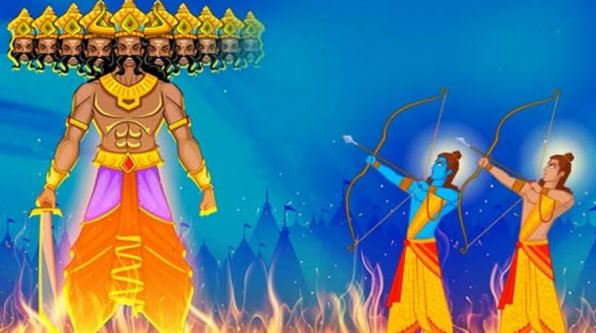 Dusshera or Vijayadashami is the tenth day of Durga Puja. It is preceded by Navratri.  Durga Puja is a ten-day long festival of Hindus that takes place in the month of Ashwin (September – October) of Hindu calendar.

Throughout India, people fast and worship during nine days of Navratri.  Legend has it that Durga Devi killed Mahishasura, a buffalo-headed demon, on the tenth day. This day is celebrated as Dusshera or Vijayadashami.

In north Indian states of Uttar Pradesh, Madhya Pradesh, Uttarakhand, and Bihar, Dusshera is dedicated to Lord Rama. According to epic Ramayana, Ravana, a ten-headed demon, had kidnapped Sita, wife of Lord Rama and took her to Lanka. Lord Rama is said to have fought Ravana, killed him and brought Sita back. Dusshera is celebrated to mark the victory of Lord Rama. On this day devotees to Lord Rama build ten-headed effigies of Ravana and burn them.

The ten heads of Ravana are compared to the inner demons of human viz., greed, infatuation, lust, passion, pride, ego, selfishness, hatred, jealousy, and anger. In today’s times, a person is expected to win over these inner demons of his and turn into a righteous being.

Throughout India, various functions are held during these ten days. In Gujarat, Dandiya Raas and Garba, two traditional dance forms of Gujarat are performed at night. In south India, the famous Mysore Palace is decorated with flowers and lights and celebrated with dance, music and other traditional art forms. In West Bengal, Devi Durga idols are decorated and placed in many streets under a pandal and worshipped for nine days. On the tenth day, processions of the idol are taken out through the streets with a pompous show, music, and dance and later they submerge the idol into the water.

Dusshera, though celebrated throughout India with different names and stories, it signifies the only thing that is, the triumph of good over the evil.