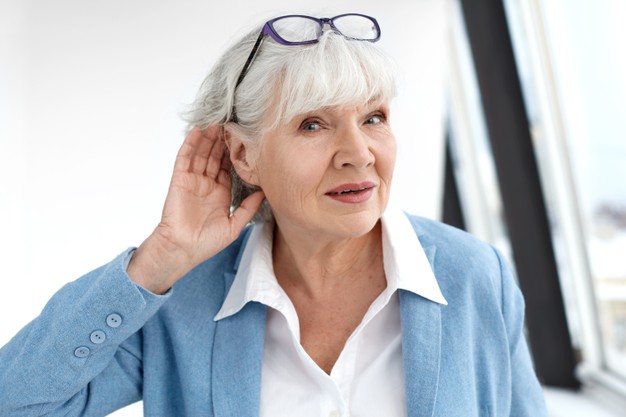 The symptoms of early hearing loss are often so subtle that people do not recognize their hearing is slowly deteriorating. In many cases, other people are usually the first to bring it to their attention. Friends, family members, or co-workers may speak up after they notice the person with early hearing loss asking people to repeat themselves often or turning up the television to a sound that would be uncomfortable for someone with normal hearing.

Although the gradual loss of hearing can be discouraging, it is a common experience. According to the Mayo Clinic, nearly half of Americans over age 65 have some degree of hearing loss. However, people do not have to be senior citizens to experience mild to moderate hearing loss.

Younger people with frequent exposure to loud noises are especially vulnerable to developing hearing problems well before they reach age 65. Fifteen percent of adults ages 18 to 64 have some degree of hearing loss according to the National Institute on Deafness and Other Communication Disorders.

Recognizing the Symptoms Associated with Early or Noise-Induced Hearing Loss

Here are several additional early signs of hearing loss besides asking people to repeat themselves or turning up the television to a loud volume as mentioned above according to the Centers for Disease Control (CDC):

As hearing loss progresses, some people respond by avoiding conversations or social situations. While this approach is understandable, it will only make things worse in the long run because isolation can increase the likelihood of developing mental health issues.

Sudden sensorineural hearing loss (SSHL), also known as sudden deafness, occurs in response to a specific trigger. The hearing may go in and out several times over a period of days or weeks and then go back to normal. Fortunately, SSHL is not permanent for most people.

One of the most frequent causes of SSHL is a buildup of earwax. Ear wax helps to keep harmful substances out of the eardrums and normally replenishes itself. A buildup can occur when people clean their ears with a Q-tip because using this method often pushes earwax further into the ears. Ear drops or an irrigation kit work better to loosen ear wax. The ear wax then comes out naturally on its own.

Attending a loud concert and not being able to hear normally for a period afterward is also a common occurrence. Additional causes of SSHL include:

Determining the cause of the temporary or recurring hearing loss usually helps identify how to correct the issue. If not, people experiencing this condition should visit an audiologist for hearing testing as soon as possible.

Quick identification of the root cause of SSHL is critical to the prospects of a full recovery of hearing. According to Nuheara, a manufacturer of smart, hearing enhancement devices:

“People who seek prompt treatment for SSHL recover their full hearing within two weeks in 85 percent of cases. They typically visit an ear, nose, and throat (ENT) doctor or an audiologist for diagnosis and treatment.”

Factors That May Increase the Risk of Hearing Loss

Hearing loss occurs due to damage to the hair and nerve cells of the inner ear. Some of the factors, such as aging, are outside of a person’s control. Loud noise exposure is a good example of a risk factor people usually can control, although some of the exposure may occur at work. Other hearing loss risk factors to consider include:

Audiologists consider sounds in the 30 to 75-decibel range safe. The risk starts increasing at 85 decibels, with some sounds having the potential to reach 165 decibels.

Chainsaws, snowmobiles, ambulance sirens, and gunshots are some of the loudest sounds that can cause extensive damage to hear with repeated exposure. Avoiding loud noises as much as possible and wearing hearing protection when that is not possible are the best ways to prevent noise-induced hearing loss.

Visit an Audiologist at the First Sign of Hearing Loss

An audiologist is the best person to determine the type and degree of a patient’s hearing loss and whether it is temporary or permanent. Completing testing and receiving a diagnosis as soon as possible is especially important with age-related hearing loss that may worsen over time. The audiologist will discuss treatment options and may prescribe a new hearing aid for the patient.

Younger people or those with only mild hearing loss may not want to invest in hearing aids just yet. Common reasons for the hesitancy include an out-of-pocket cost for hearing aids as high as $5,000, self-consciousness about wearing them, or concerns about comfort. Fortunately, companies like Blue Angels Hearing put its product up for sale online, directly to consumers making their products affordable compared to other brands.

Personalized hearing devices, sometimes referred to as “hearables,” offer people an alternative to traditional hearing aids. These hearables typically look like wireless earbuds. They connect to a smart device and allow people to set controls based on the environment and their own hearing profile.