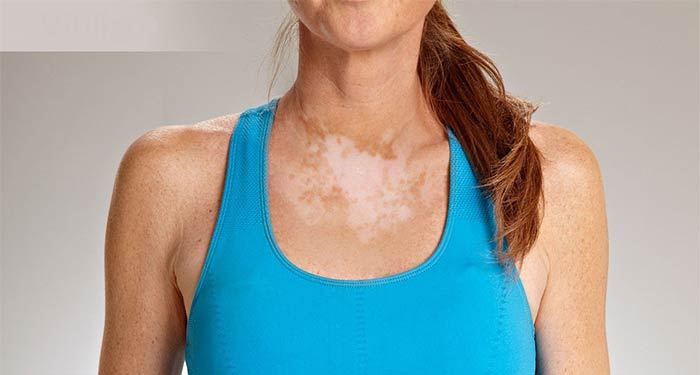 Vitiligo is a health condition, in which the patches of the skin lose their color,

This is a photosensitive condition, meaning that the areas affected by it are more sensitive to sunlight than those that aren’t.

Experts have found to be very difficult to predict is the patches can spread to other areas or not and how long could take. Whether it is a few weeks, months or years.

These patches tend to be more obvious in people with darker skin or tanned skin.

The most obvious sign of vitiligo is the loss of skin pigments, producing white-ish patches or “depigmentation” on the person’s skin. Some other less common signs are:

– The whitening or slight graying of your hair, eyelashes, eyebrows and even your beard.
– The loss of color in your mucous membranes. Those are the tissues that line in the inside of your mouth.
– Also, the loss or change in color of your retina.

Vitiligo may very well affect any area of your body, but depigmentation commonly appears first in the most sun-exposed areas of your body, like arms, hands, face, feet, and lips.

Vitiligo normally appears in the form of three kinds of patterns:

Vitiligo can start to appear at any given age, but it is more common to appear between the ages of 20 and 30, with white patches appearing just above your eyes on your forehead, also in your neck, genitalia, knees, elbows, and armpits. They can be symmetrical most of the time and spread to your entire body this disorder does not distinguish from sex, age or race.

There are a number of remedies that can help you decrease the visibility of the condition.

Sunscreen: Worldwide medical organizations recommend to use sunscreens because the areas affected by the condition are more susceptible to sunlight and they burn more easily. You may want to consult with a dermatologist first as they can recommend a more suitable type.

Another common remedy is something called Phototherapy using UVB Lamps. You can do this on a daily basis on your home, or you can visit a clinic at least three times a week.

In the cases where it is considered to have “Mild Vitiligo” Skin Camouflage is recommended. The white patches are “camouflages” with colored creams and makeup.

More aggressive treatments include the use of topical corticosteroids, they can stop the spread of white patches over your body. Some people using this kind of treatment have reported having total skin color restoration.

Amongst other you can try are Calcipotriene, Psoralen, Skin Grafts, and Tattooing.