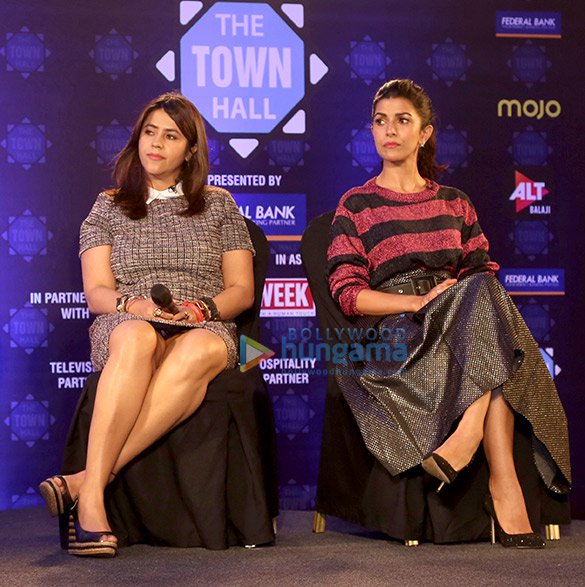 Talking at an event organized by an English Channel, leading producer Ekta Kapoor made a statement, which is shocking. Probably behind the curtains, many had the idea of this but a statement like this coming from Ekta Kapoor has made it rather shocking for many.

Talks about sexual harassment have become trending nowadays. Not to forget the #MeToo movement, which is all over the social media, many are coming up to share their stories. The recent case of Hollywood producer Harvey Weinstein, who was accused of sexually harassing several actresses, has made the conversation broader in the film industry too. Expressing her opinion about this whole sexual harassment thing, television queen and popular producer, Ekta Kapoor said that actors also use their sexuality to get work. This was quite a revelation made by the producer. Though sexual harassment has been one of the darker sides of this showbiz business, no one was speaking about it openly until now.

Present on Mirror Now’s The Town Hall along with actress Nimrat Kaur, Ekta also spoke about the #MeToo movement. She said, “Well, I think there are Harvey Weinstein in Bollywood, but there is probably an equal number of Harvey Weinstein on the other side of the story, but people do not want to talk about that part. Yes, there are people in power like producers who use their power to take advantage of people, but at the same time there are people on the other side, like an actor or others who need the job, would also use their sexuality to get things done. Therefore, I believe that predators should not be put in a box based on power. It is always not true that the person who does not have power is the victim.” She further added, “Being a producer, on a personal level when I talk to my male counterparts, they said they were propositioned blatantly. Is that person not a predator? In our industry, if one actor meets a producer at 2 a.m. and hooks up with him and after five days, if she wants a job based on that and the producer doesn’t give the job because he wants personal and professional things separate, then who is the victim here? The interpretation is always that the powerful person took advantage of the poor little budding actor or something that is always not the truth.”

Seems like Ekta Kapoor is trying to show the other side of the coin too. Incidentally, earlier this month a cousin of Ekta Kapoor’s father, Jitendra, had made allegation on him. The cousin accused Jitendra of sexually harassing her, 47 years ago during a film shoot in Shimla. Was the statement of Ekta revealing the other side of the story or was it an attempt to defend the allegations made, on her father?