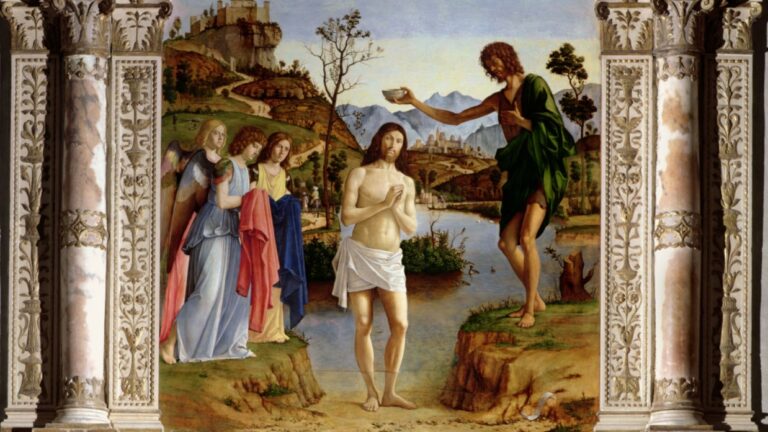 The life of Christ and stories from the Holy Bible have always been an inspiration to artists, young and old. From the iconic Last Supper by Leonardo Da Vinci to the realistic depictions of biblical anecdotes by Rembrandt, they hold an eternal power!

The great masters bring forth, each in their own style a treasure trove of parables, containing the very essence of Christian beliefs and the idea of redemption. When one views such artwork one may be inspired towards a more spiritual path while others are left in awe of the artist’s spectacular creation.

Here we look at some of the most beautiful works of religious art and the artists who painstakingly rendered such abstract matters into palpable form. Their art lives on today as the pictorial depiction of the life and message of Christ.

1. The Storm on the Sea of Galilee – Rembrandt Van Rijn

This 1633 oil-on-canvas painting by Rembrandt Van Rijn, the great master of the Dutch Golden Age is something to behold! We all know the story of how Jesus calmed the sea of Galilee and saved the boat from sinking, much to the surprise of his disciples who then understood his true power and connection with the almighty.

In the painting, we can see the disciples and fisherman fraught with worry as a wave rips apart the sail and the storm threatens to engulf their boat. The man staring straight at the audience is a self-portrait of the artist himself while Jesus is seen sitting very calmly and assuring his disciples of their safety.

Perhaps the most recognizable and admired of all religious artwork is The Last Supper painted by the Italian Renaissance painter Leonardo Da Vinci (1452-1519). This mural masterpiece is said to have been started in 1495 and completed around 1498. It adorns the Santa Maria Delle Grazie in Milan, Italy.

The Last Supper depicts the last meal that Christ had with his 12 apostles as described in the Gospel of John, 13:21. The last supper is pivotal to Christian theology as it is at this gathering that Christ offers his body and blood to his apostles symbolically in the form of bread and wine. It is also here that he speaks of the one amongst them who will betray him.

3. Edgar Degas – The Crucifixion (After Mantegna)

One of the famous artworks of Edgar Degas Paintings is “The Crucifixion”. His stunning biblical paintings were inspired by the Italian artist Andrea Mantegna. Italian painters created stunning works of art in the 15th century, introducing Roman Catholic stories and religions of the time. Edgar Degas felt strongly influenced by his work and was urged to recreate the crucifixion in a similar style.

4. Christ on the Cross – Diego Velazquez

The Spanish painter, Diego Velazquez (1599-1660) is considered one of the greatest artists of all time and became a source of inspiration to hundreds of artists to come including Salvador Dali and Pablo Picasso who swore by his exceptional skill at bringing images to life.

Christ on the Cross (1632) also known as Christ Crucified, is an oil-on-canvas painting that beautifully portrays one of the most important scenes in the bible – the crucifixion of Jesus Christ. It is presently owned by the Museo del Prado.

5. The Lamentation Over the Dead Christ – Andrea Mantegna

The Lamentation of Christ or the Dead Christ(1480) is a glorious work of art done by the Italian Renaissance artist Andrea Mantegna(1431-1506). In this painting, the dead body of Christ is depicted lying on a marble table, still fresh with the wounds of crucifixion. Also present are the Virgin Mary, Apostle John, and Mary Magdalene, mourning his passing.

This painting is said to have been painted by the artist for his personal funerary chapel but was found in his studio and sold off by his sons to pay off the artist’s debts. The painting is presently on display at the Pinacoteca di Brera in Milan, Italy.

6. The Sermon on the Mount – Carl Heinrich Bloch

A masterpiece by Danish artist Carl Heinrich Bloch(1834-1890), The Sermon on the Mount lays impetus on a scene as detailed in the Gospel of Matthew (chapters 5,6 and 7) in which Christ puts forth his teachings to the people.

This mountain is usually called the Mount of Beatitudes but the exact location is unknown. Here Christ is seen putting his moral beliefs forward to eager listeners and disciples.

7. The Light of the World – William Holman Hunt

An exceptionally beautiful painting, The Light of the World (1851-1853) painted by the English artist William Holman Hunt (1827-1910), plays so well with the concept of light and darkness. It truly portrays Christ and his message as that which brings hope and light into a world of sin and suffering!

This artwork depicts Christ about to knock on a door that has long been left unopened with overgrown weeds blocking the entrance. It is said to be a representation from a verse in Revelation 3:20 – “Behold, I stand at the door and knock; if any man hears My voice, and opens the door, I will come in to him, and will sup with him, and he with Me”.

Religious art adorns the greatest galleries, renaissance chapels, and cathedrals, where thousands flock to get a view of these masterpieces. You can also get these magnificent paintings to add beauty and serenity to your living room by getting them recreated for you in the most authentic technique and style.