Google saved a life; See what happened when a 24 years’ girl searched “How to commit suicide” on Google 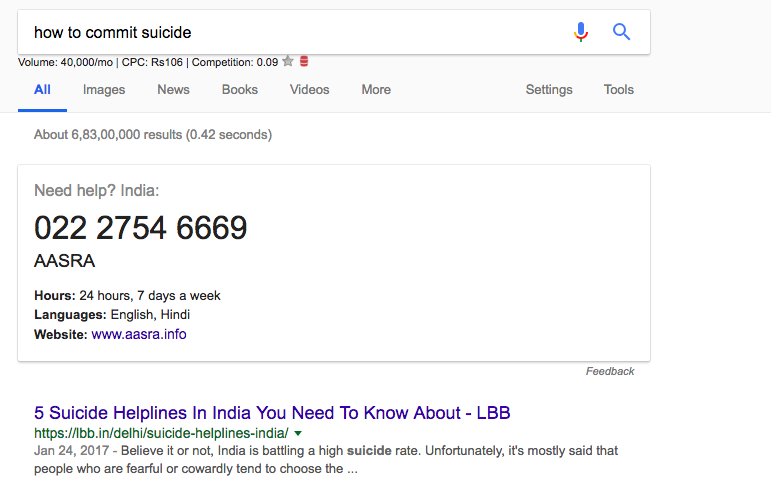 Well, we all know about GOOGLE, the biggest source of knowledge.   Nowadays people don’t wish to get knowledge from books, by reading newspapers or watching news channels on TV. Google has made the people so lazy that they are not ready to find any knowledge in the books or anywhere in hard copies. You want to know anything? Just Google. This has now become a trend.

As per the reports published by the Times of India, a girl, at the age of 24, was going through some hard times because her boyfriend broke-up with her due to peer pressure from his family. This mishappening made her even sadder and depressed that she took the decision of ending her life. So, she was trying to find a way out to end her life. As she wanted a painless death, therefore, she looked into it on Google by typing, “How to Commit Suicide”. As a result that she got from Google was something amazing rather than getting the methods of suiciding. She was responded with the suicide helpline number along with the website details of AASRA, which is a prevention center for such circumstances. When she tried to make a contact with the number it directly rang at the office of Deputy Inspector General of Police.

The Deputy said that “In the month on January, I got a call from a girl on the other side. She seems to be depressed and nervous, she told me, “How she tried to search it on google as she was planning to end her life”, I heard her whole story and asked her to visit the office so that we can talk about this in detail, said by the DIG Jitendra Kumar Shahi told TOI.

Top 8 Places to Go along with Your Kids in Bangalore: Exploring the City