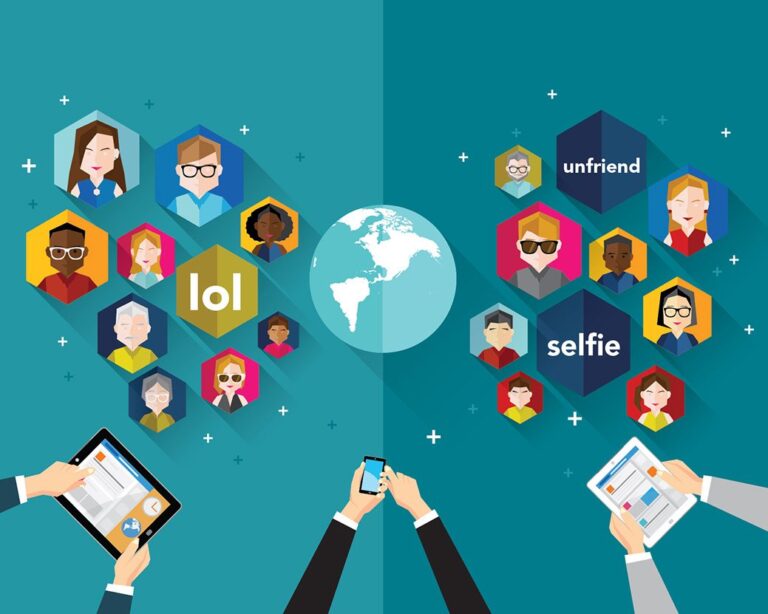 Do you text constantly?  Do you now avoid phone calls because they take too much time?  Has text-speak crept into your daily language and your writing?  Have fun with that!

Others, however, have not yet adopted this new method of communication.  We may even manage to avoid it indefinitely.  In the meantime, this often obscure new digital language is expanding faster than an article like this can fully encompass.  However, for the old-school folks among us, here is a cheat sheet of the subcategories of vocabulary and signs to help decode the language of social media.

Is social media increasing the pace at which languages change?

Before we dive into the detail of decoding text-speak, let’s take a moment to consider the pace at which languages change. All languages evolve – this is not something that is happening solely due to the widespread availability of social media. However, the global nature of social networking has done much to contribute to the pace at which new terminology has caught on – social media language has given us a crash course in visible language evolution like nothing we’ve seen before.

One cryptic tool of text messaging is the myriad of symbols in various combinations to convey not only words but moods as well.  The Smiley Face J spawned others, such as the Less Happy FaceK, or, for really bad days, the Really Bummed Out Face:  or 8-0: Shocked Face.  Thank goodness, there are websites to help you understand them all.

Then, there are partial words, such as U for ‘you’, R for ‘are’, and 2 for ‘two’ (no surprise here).  However, some of them, oddly enough, are not even any shorter than the original, for example, zex for sex!  Some words acquire new meanings in the digital world, for example, a troll, which is an online troublemaker.  Others combine letters and numbers to make the right sound, such as g2bl8, which translates as ‘going to be late’, or BCNUL8R, which means ‘be seeing you later”

Acronyms consolidate meaning, often to express reactions, such as ROTFL, translated as ‘rolling on the floor laughing’.  This pattern has been elaborated upon, usually too crudely for sharing in a family website.  Use your imagination.  Less offensive is c|n>k:- coffee through the nose into the keyboard.

Others warn of impending discovery or intrusion by the parental units, for example, POS for ‘parents over the shoulder’, PAW or PRW for ‘parents are watching’, or PIR, for ‘parent in the room’.  These Ps are probably concerned that their offspring are discussing or doing something entirely inappropriate.

The potential for such mischief is apparently endless if the number of acronyms dealing with sexual behavior is indicative.  Consider NIFOC: Naked in Front of Computer, TDTM: talk dirty to me, and GNOC: Get Naked on Cam (webcam).  No wonder so many Ps are W with great trepidation or at least trying to!  Much more useful (for informal and discreet discussion), are terms such as PEBKAC: a problem exists between keyboard and chair.

Some words or phrases are expressed as the numbers on a telephone keypad to get the first letter of each word.  Thus, 459, stands for the letters ILY.  This, in turn, stands for ‘I love you’.  Thus equipped, you can express your feelings undetected by anyone – except other texters!

Other numbers used in texting have a second and deeper level of meaning for a different reason.  411, for example, is the old-school telephone number for telephone directory information (formerly a free service in the age of dinosaurs and landlines).  It now means information or ‘the scoop’, as in ‘what’s the 411?’

There have, just in the last decade and a half, developed texting dialects for different user populations.  Kids updating their Facebook status, grownups in a chat room (on, for example, regarding, DIY, herbal medicine, Jane Austen, cats, or Dr. Who), and World of Warcraft players, all use different terms.  Familiarize yourself with the specifics.

For example, here are several used largely on Twitter:

IMHO: in my humble opinion

AFAIK: as far as I know

Here’s a hint from personal experience for beginners when confronting an undecipherable term or symbol.  Even if you are a ‘newbie’ or ‘noob’, your polite request for a translation is likely to be received graciously.  Just try not to slow down the flow too much, especially if you are participating in a game.  Besides, any online group too snarky or impatient to clue in a newcomer may not be worth pursuing anyway.

These texting contractions, symbols, and acronyms are undeniably useful, in spite of the way they outrage orthography.  For example, they compress a complex idea into an email subject line, tiny cell phone screen, or a 140 character Tweet.  This telegraphic code spares aching thumbs unaccustomed to the task.  Note, also that such condensed languages are nothing new.  Shorthand accomplishes the same thing for more quotidian subjects in business and law.

Furthermore, insular, and/or fringe, populations (whether teenagers, prisoners, spies, slaves, or sports coaches/teams) have always created streamlined slang that conceals meaning from outsiders.  Teachers worry that texting will infect correct spelling and grammar outside social media.  Remember that you should avoid using contractions and colloquial vocabulary in academic writing. Perfectly written academic papers can be obtained by placing an order on one of the sites listed here. Employers worry that the informality (and time-wasting) will spill over into business communication.  The jury is still out on these issues.  Use discreetly and moderately!

As you can see, the language of social media is somewhat different from the one we use in our daily speech and these phrases and abbreviations are something you should be aware of when you have an active page or create content for such networks.