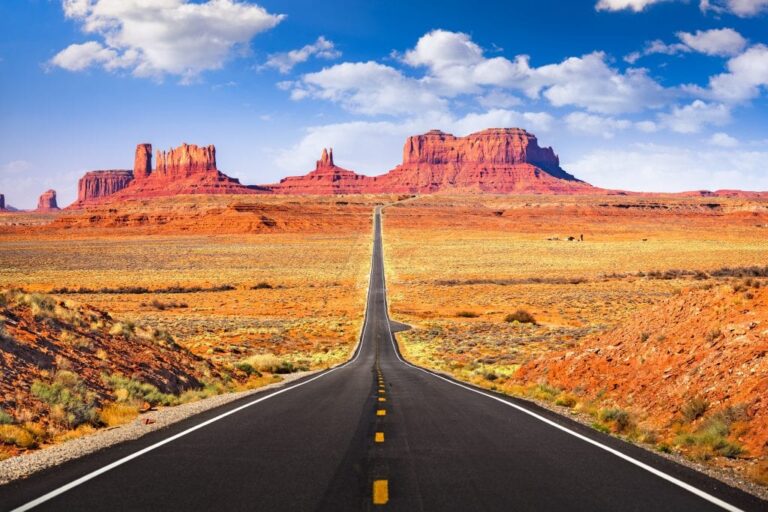 Road trips are a time-honored American tradition. They are, in most cases, the best way to visit and get to know the US. It allows you to stop and mingle with the locals as well as recreate some of the most famous road trips in American cultural history.

Driving on your own is always more comfortable and free since it allows you to choose your own itinerary. In order to do so, foreign drivers need to provide international driver permits, issued by the InternationalDriversAssociation, as well as a national license, without which it’s not valid.

1. A Trip From San Francisco to Utah

A trip that starts in San Francisco shouldn’t overlook the city itself since it’s one of the most beautiful cities in the world. Make sure to drive over the Golden Gate Bridge for a unique view of the city. The next step on your road trips should be Lake Tahoe, where you can stop and dive or kayak or just enjoy the scenery.

The next big attraction on the way to Utah is Yosemite park with all of its waterfalls and giant trees that have stood there for centuries.

Vegas is also on the route and you should take out at least a couple of days to visit the city of sin and gambling and play a few games yourself. The open spaces of Utah are next and it’s the scenery itself that will make you fall in love with this part of the country.

2. A Trip to The Deep South

A trip from Chicago to New Orleans will take you across six states and during that time you’ll get to experience all the diversity and complexity of American culture as you go further south. While in Chicago itself, check out Lincoln’s birthplace since Honest Abe is Chicago’s most famous native.

The next stop is Memphis which played such a big role in the history of American music. It’s the birthplace of both jazz and rock n’ roll. The most important stop is therefore Graceland, the famous Elvis mansion.

As you go down the Mississippi River you’ll notice the change in cuisine and you should make a stop at some of the local vendors and explore the cuisine which came to be as a mixture of countless local and national influences.

3. A Ride Along the Pacific Coastline

A drive along the Pacific Coast is a ride from San Francisco to Los Angeles. Since it’s a ride between two amazing cities, the most important features will be the starting point and the destination itself. The coastline with small seaside towns is also not to be overlooked due to its beauty and a chance to try water and extreme sports.

The cities along this route are often overlooked since most decide to fly to LA and public transportation rarely makes stops at the small towns known only for their beaches.

The best time to take this ride is in spring or autumn since the weather will be forgiving during these seasons and the view will be at its most beautiful. You can also come in summer but there will be more of a crowd then.

The Florida Keys are connected via a series of 42 bridges. Going over these bridges is one of the most rewarding driving experiences you can have in the US since it allows you to go across the ocean and enjoy the scenic view in the process. Jumping from one island to another also means you can check out small and beautiful seaside cities that are not that well known.

The best part of this journey will be the drive itself since at some points it will seem as if you’re flying over the ocean. The drive is great at any time but the best to avoid the hurricane season from June to November or at least to be aware of it.

Winter is usually the busy season for this part of the country since most travelers visit Florida to avoid the winter in their own parts of the country.

The red rocks of Nevada are among the most beautiful parts of the US and one that everyone should visit at least once. The best thing about them is that you can make a loop around Las Vegas when visiting the area. This means that once you take a break from the scenic view, you can gamble a bit.

The deserts of Arizona are the next on the route and the scenery won’t change once you cross the state line. You’ll still be in the red rock country that was so important to Native American culture. Making the stops to get to know more about that culture is the best way to go.

Long and empty roads are the best part of this trip alongside the gambling and the flashing entertainment of Vegas. When you’re alone on the road and riding through the red desert you can really appreciate the sense of freedom this area came to symbolize.

On the complete opposite end of the American experience, there’s a driving tour that will get you through the largest east coast cities. This is also where the US came to be and it’s a great tour for history enthusiasts.

Cape Cod is the playground of New England and summer is the best time to visit. It’s a great place for those who enjoy fishing and water sports but you can also enjoy it if you’re there for the view of the ocean. The lighthouses are the especially important part of the trip and they are both beautiful and somewhat haunting.

Regardless of which tours you take you’ll only catch a glimpse of the complex American experience so make sure to come back and try to visit the country from a different viewpoint, next time – it will seem new every time you do it.