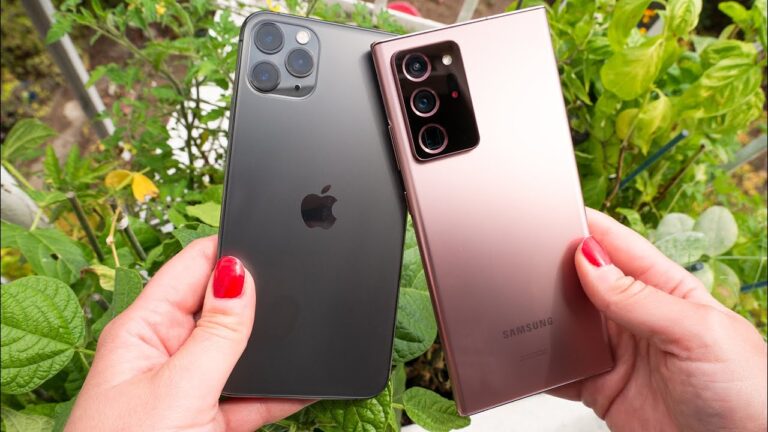 Both these devices come equipped with OLED screens with the iPhone sticking with its choice of calibrated colors for a more accurate representation. Samsung’s, on the other hand, is a bit more muted when shooting in Natural mode, but has more room to be creative with your colors. The Note 20 Ultra has a refresh rate of 120 Hz while Apple’s iPhone 11 Pro Max is still at 60Hz.

With regards to their design, Note 20 Ultra has this fresh look although it does look similar to the latest Samsung smartphones. At 6.9 inches, the Note 20 Ultra offers plenty of surfaces for you to enjoy, especially since the selfie camera is just this tiny hole on the screen that is barely noticeable. You can expect that playing video games on this device is going to be quite entertaining given that the refresh rate is equal to the task in terms of response and speed. For sure, once you have sampled it, you won’t be able to go back to lower refresh rates.

The iPhone may have this dated look, but it is quite pretty to look at with all the right curves on the edges. One of the advantages of the iPhone here is that its design hasn’t changed much over the years which is one of the reasons why it is easy to spot out of all the smartphones out there. It is classy, it is stylish, and it is guaranteed to have a solid body.

The Note 20 Ultra sports a noticeable bump at the back where its triple camera set up is located. And when we say bump, it actually keeps the phone elevated when you put it down on the table. Some won’t mind this given that the cameras are quite impressive, but don’t dismiss the triple camera setup that the iPhone 11 Pro Max has since it is less noticeable compared to its rival.

Going forward with the camera specs, Samsung has indeed elevated its camera set up since it knows that they will be competing with Apple. The Note 20 Ultra does have four cameras at the back with a 108MP primary sensor, 12MP ultra-wide lens, and also 12MP telephoto lens. The same specs can be found in the iPhone 11 Pro Max with the exception that all rear lenses are at 12MP only. The selfie camera in the iPhone 11 Pro Max is higher at 12MP while the Note 20 Ultra only has 10MP. You might think that you are getting plenty out of the Note 20 Ultra but it seems that Apple’s 12 MP sensors at the back constantly deliver high-quality shots in various settings better than its opponent.

There is no denying that these two smartphones deliver when it comes to camera quality. Their dynamic range is excellent, the colors are crisp, and the details are just sharp. You might feel like a professional photographer with the quality of the photos you have been taking. Of course, there are differences such as the colors from the iPhone are warmer compared to the colder hues of the Note 20 Ultra. If you want to take zoom shots, stick with Samsung’s camera as it provides more detail.

This is an age-old debate on which operating system is better but hard to answer since they both have different environments. We can say that these two are at the top in their respective categories. Let’s take a look at how these two variables.

Samsung is one of the leading brands in the Android market and it has equipped its Note 20 Ultra with the latest Snapdragon 865+ processor from Qualcomm. This is the fastest chipset for an Android but then there is the A13 Bionic chipset by Apple which stands out. Although both are powerful in their own right, the A13 Bionic chipset has left the Snapdragon 865+ behind in terms of performance and speed.

Both systems offer multitasking features with Samsung offering this split-screen system so you will be able to switch back to the previous program you are using and still find it as is. On the other hand, Apple prefers to stick with just one program at a time. You won’t find your screen being split into two, or applications floating in the background. Some may find this good enough while others prefer the easy access that Samsung is offering.

Another area in multitasking that Samsung stands out is its ability to connect with Smart TVs or monitors with ease. If you want to transform your TV into a personal computer you will just need a keyboard and a mouse and you are good to go. This is where Apple is missing out though so this is a nod to its rival. Let’s not forget that the S Pen is also featured in terms of performance as this pen can do multiple functions with ease.

Since Note 20 Ultra is bigger and can support multitasking, it requires a bigger battery pack that Samsung did provide. This unit comes with a 4,500mAh that can give you a full day’s use. Although the 11 Pro Max has a smaller battery which is at 3,969mAh, it can still supply your phone with power even when you are a heavy user.

So, which is better in the contest between the iPhone 11 Pro Max vs Note 20 Ultra? Although the Note 20 Ultra is bigger and has higher camera specs, the 11 Pro Max stands out because of its performance. The A13 Bionic chipset is, hands down, the best in the market today, and even though Samsung has upped its camera game, Apple’s camera improvements still offer much better and more realistic shots than its rival.

Regardless of whether you are getting a brand new or an iPhone 11 Pro Max refurbished about which you can read more at this website there is no doubt that it can still stand on its own even when it butts head with Samsung’s latest flagship phones. With its impressive performance, more robust user interface, and solid design, not to mention cheaper prices compared to Samsung’s offerings, it is no wonder that many smartphone users tout Apple as the best in the market today.