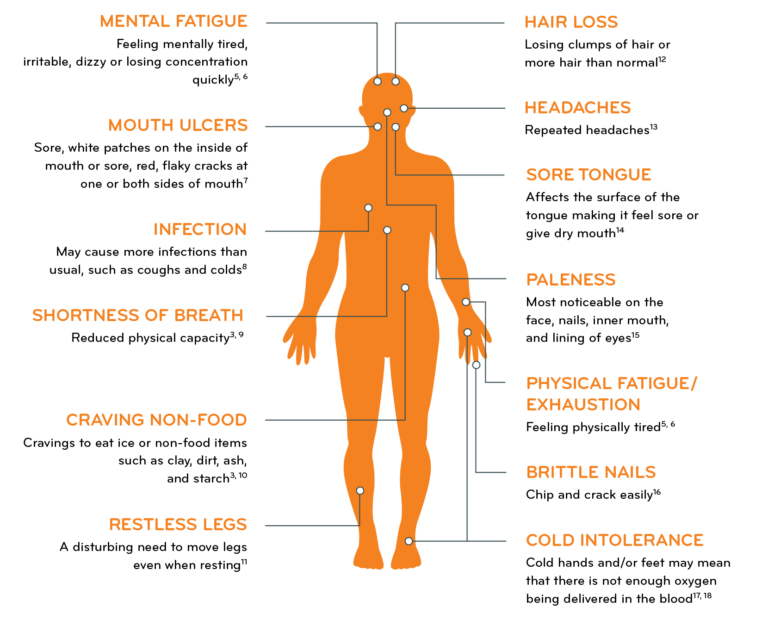 Iron is primordial in the production of hemoglobin, which helps red blood cells to transport oxygen through the organism. So lacking of this substance affects everything in the human body and can originate anemia. Nevertheless, iron taking has been taken for granted for most people; especially observe in a bigger degree in women.

The following indicators should be taken into account to determine the insufficiency of Iron in the system. Among them are:

Being the most common symptom of iron deficiency is also the hardest to identify. Since feeling tired can be attributed to other factors such as a hard day at work or at home, people rule out iron lacking as one of the possible source of this fatigue. Since red blood cells take oxygen to all parts of the body thanks to iron presence; so if this element is lacking, oxygen will not be transported properly and energy will be reduced. Then, a tiresome sensation would be felt and the lack of vigor would be evident.

Women with low levels of iron in their bodies cause the presence of heavy periods in the menstrual cycle. The control exerted by iron in the circulatory system is of a high importance, so the absence of the element will be reflected in high levels of blood loss during periods, an action that would be repeated month after month.

Good levels of oxygen in blood provides the fit skin pigment, lacking of iron will reduce the levels of the gas in blood and the face would present light complexion. The appropriate skin color is provided by hemoglobin, produced by blood at good oxygen levels; when this protein is low, the skin, inside part of bottom eyelids, gum and lips would be less red than normal, indicting small amounts of iron in the system.

Low levels of oxygen lead to a feeling of lacking air when doing daily activities. So any normal task, like going upstairs would present a feeling of short breath after doing it. If that is the case, it is a clear sign that something is lacking and iron is the element that originate that sensation.

Iron deficiency can lead to anemia and this disease can make the heart suffers from irregular heartbeats, enlargement, and even heart failure. A double care should be taken when heart conditions are presented in the system or in the family history.

An uncontrollable desire of moving legs without any apparent reason is shown; it is an indicator of high possibility of low levels of iron in the organism. Be careful when sitting your legs start moving arbitrarily.

Iron deficiency will originate headaches due to the lack of oxygen transported to the organs in the body. Although, the brain is the first organ to receive oxygen, the low levels carried by blood due to iron insufficiency will reduce the amount the life needed gas.

Feeling anxious for no specific reason is another indicator that the levels of iron are in the low number. Since oxygen is not well taken through the body, the sympathetic nervous system accelerates, creating that sensation of angst.

The presence of anemia as originated by iron deficiency would lead to the loss of hair, since the improper transportation of oxygen in the system debilitates the follicles in the head.

When iron is lacking from the body, myoglobin is absent too; a substance that helps with the muscle health, such as the tongue. The sensation of a sore, inflamed and weirdly smooth tongue is felt by those who have low levels of iron in their bodies.

Also, pregnant women, vegetarian or vegans, and people suffering from an underactive thyroid can have insufficiency of this element and should look for assistance in this case and the proper diet to supply the amount of iron the body needs, as well as those who present the symptoms and signs described above.