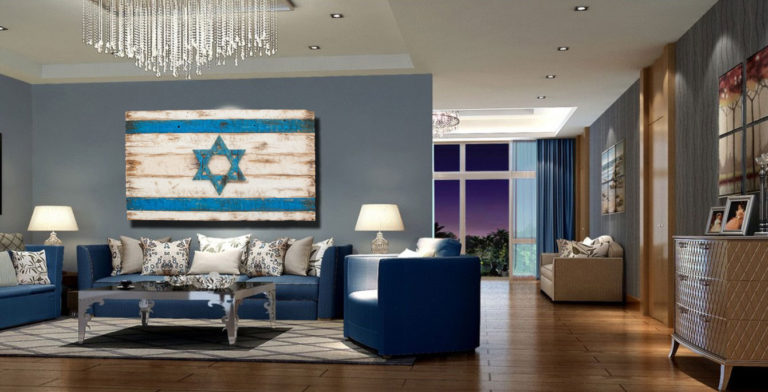 In every household, there are items that represent the religion of that home’s residents. These objects do not only symbolize one’s identity, but they also illustrate one’s dedication to his religion. In the following text, we are going to introduce you with some basic objects that every Jewish home should possess. We are going to talk about some decorative items as well as objects that are used during big, religious holidays.

The first thing that probably comes to your mind is the Hanukkah menorah. Basically, this is a candelabrum with nine branches that are lit during a Jewish festival called Hanukkah. The festival is also known as The Festival of Lights at it celebrates the rededication of the Holy Temple in Jerusalem. In the second century BC, Greeks tried to force Jews to accept their religion and culture by destroying their homes, prohibiting the practice of their religion, and even placing the statue of Zeus in the Jewish Temple. Jews mounted great resistance and led by Judah (called Maccabee) fought the attackers and three years later took over the Jerusalem and the Temple. Upon cleaning the Temple, they found enough oil to burn for one night, but instead, it burned for eight.  That is why the festival is celebrated for eight nights, during which each additional candle (the first one is lit in advance and is used to light other eight) is lit until all of them are burning together on the last night of the festival.

Another object that decorates every Jewish home is a Mezuzah. Mezuzah is a parchment, inscribed with verses from the Torah which are handwritten. It is usually hanged on the door and according to Chazal, it protects the house’s residents. Also, the mezuzah must be changed once a year, before the holidays.

Siddur and Machzor are Jewish prayer books that are essential to every Jewish household. Siddur is a book that contains prayers for weekdays and Shabbat, while Machzor consists of long prayers for major Jewish holidays. Furthermore, Tefillin are a set of small, leather boxes that contain verses from the Torah inscribed on small parchments. Tefillin are worn by Jews during morning prayers. Depending on the community they can be worn only by men, or by both men and women.

There are many items that are used on Sabbath such as Kiddush Cups and Sabbath candlesticks which symbolize the divine presence of God. Usually, the candles are lit by the matriarch of the family, 18 minutes before the sunset. However, when Sabbath is a holiday or it is followed by a holiday, the candles must be lit after the nightfall. In addition, there are Havdalah candles and Callah covers and boards.

All these objects can be purchased in a number of different stores such as an online jewish.shop.

When talking about other decorations, Jews display old photographs, which are passed from one generation to another, of family members and ancestors. This is a way of keeping the memory of loved ones alive. Moreover, Jews possess piles and piles of books about Judaism in general.

To conclude, these are some main objects that are a part of every Jewish household. These items are recognized all over the world as symbols of Judaism.