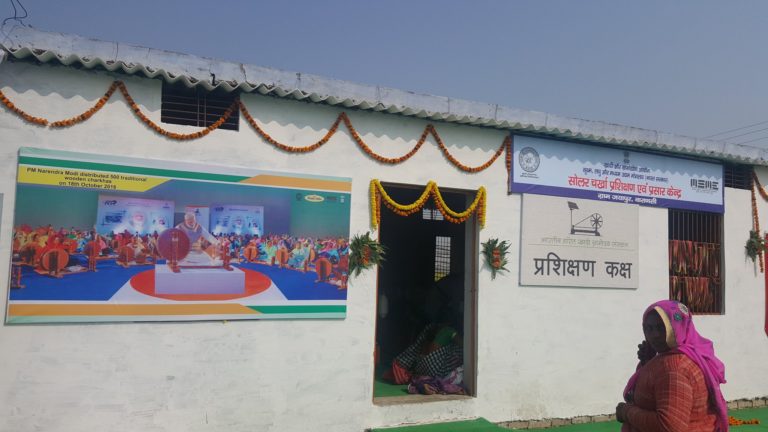 Distribution of the solar charkhas and looms and the training of all women were actually among the initiatives that were taken by Khadi commission for creating job opportunities in the Prime Minister’s adopted villages at Varanasi.

A survey by KVIC (Khadi & Village Industries Commission) stated that the sustainable employment has actually been created at places like Jayapur village, Sewapuri and also Kankariya villages of the PM’s constituency.

In the past one year, KVIC has gone on to create a lot of job opportunities at Varanasi, especially in all the PM’s adopted villages of the parliamentary constituency. Apart from that, some new 20 plus model charkhas and around 5 looms were even given to the KVHS (Krishak Vikas Gramodyog Sansthan) in the village Jayapur. A survey stated that this new step was now taken for making the rural population more self-reliant and to even put an end to their migration to other big cities.

With these activities, KVIC has now provided a lot of direct employment to all the 70 people and even has generated ten indirect employment opportunities at Jayapur the previous year. In the month of November 2016, KVIC set up a solar charkha training centre at village Jayapur, wherein 20 solar charkha as well as 5 looms were offered.

Until now, more than 110 women have now been trained on the solar charkha and are being offered loan under the PM’s Employment Generation Programme. In this project, all the interested villagers will be offered charkhas, looms as well as other equipment that is needed to form small scale industries, like incense sticks, candles, honeybee cultivation and so on.

SCTC (Solar Charkha Training Centre) was set up in the month of January at village Kankariya. 25 solar charkhas as well as 5 looms were offered by KVIC where more than 100 plus women have so far been trained. These 2 activities have also created some really meaningful employment opportunity at these 2 places.

KVIC has also fixed around ten biogas plant and also setup 5 new biogas plants at Jayapur. This activity has not only contributed to the Swachh Bharat Abhiyan, but also offered clean energy to 15 local families at Jayapur.