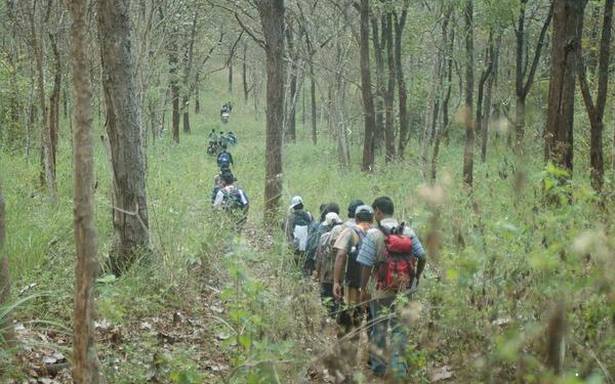 Karnataka Ecotourism Development Board (KEDB), which runs myecotrip has stopped taking trekking booking as a precautionary measure. The Forest Department of Banglore on Monday banned trekking in all forest areas including wildlife sanctuaries and tiger reserves until monsoon hits the area. This decision was taken as a precautionary measure, a day after a fire broke out in Theni forest in Tamil Nadu which engulfed lives of 10 trekkers.

Principal chief conservator of forests (wildlife) C Jayaram said that “Kurangini Hills in Theni, Tamil Nadu, where the incident happened, is a hillock with grassland cover at many places. It is difficult to survive if such patches catch fire. Karnataka too has many such grass-covered hillocks where people regularly venture out for treks. Since it’s summer, we’ve instructed forest officials concerned to ensure they don’t allow trekking in forest patches.” He informed that forest areas in Karnataka,  that are prone to catch fire are hillocks of Madikeri and Pushpagiri in Kodagu district, Kuduremukh, Mullayanagiri and Bababudangiri in Chikkamagaluru district and Kodachadri bordering Shivamogga and Udupi districts.

Talking about the requirement to take this decision, he added that, “Some forest officials are sensitive enough to put curbs on their owns on treks during summer. However, in the wake of Tamil Nadu incident, we have issued a fresh communication to all forest divisions to ensure they don’t allow trekkers into fire-prone patches.” According to the reports, in the past month, a dozen of forest fires have been reported in trekking areas near Bangalore.

Karnataka Ecotourism Development Board (KEDB), which organises regular trekking trips at the seven eco trail destinations have also stopped taking any booking until further notice. .R. Ramesh, General Manager (Forests), KEDB said, “Even though there have been no untoward instances so far, we stopped taking bookings as a precautionary step. Trekking will be stopped until further instructions from the Forest Department.” Apart from them, the private trek organisers have also stopped taking booking for forest area treks. The Portal Adventuresome has also cancelled its upcoming Kumara Pravatha trek. Instead, it has rescheduled the bookings for treks in Hampi or Gandikota in Andhra Pradesh. Ajay Singh Shekhawat, Chief Executive Officer of the portal said, “We are definitely going to suffer financial losses if this ban continues through the summer when children have vacations and bookings are high. Trekking is one of the more popular events. From 15 events, our offering has come down to seven.”

Another trek organiser, Yashwanth Urs from Adventure Adda said, “We will be sticking to beaches or waterfalls where we do not have to go to forest land. The rest have been cancelled. We hope that this will not become a precedent. Instead, it would have been better if routes, where the possibility of forest fires are low, were opened.”

It is not just in Karnataka, but also in Kerela and Tamil Nadu the fire-prone forest treks have been banned and the trekkers are left with almost no options for trekking this summer.