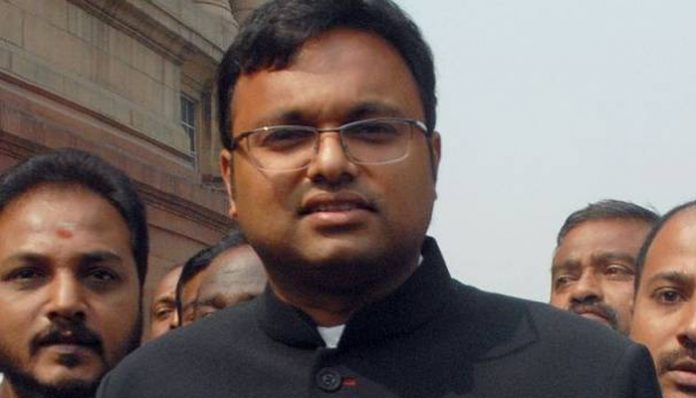 KartiChdambaram, son of former finance minister P Chidambaram was granted bail in the INX Media corruption case on Friday, 23 March, by Delhi High Court. Karti was in the police custody for 12 days. He was arrested on 28 the February by the CBI at Chennai airport. His judicial custody was due to expire on 24th March. When Karti returned from The US on 28th Feb, he was immediately taken under arrest from the airport itself.

An FIR was registered against him in May 2017 and since then many allegations have been made on the for finance minister’s son. He was accused of facilitating Foreign Investment Promotion Board (FIPB) clearance to INX Media in 2007. P, Chidambaram was the finance minister then in the UPA government in 2007.

Karti was granted bail by Delhi high court on Friday in on a surety of Rs 10 lakh. Also, he has been given a strict warning to seek prior permission from the Central Bureau of Investigation, if he wants to leave the country. Karti’s lawyer has assured that his passport has already been submitted to the authorities. He has also been instructed that while he is out on bail, he cannot tamper the evidence, close any bank accounts or influence any case witness.

The recent course of the case is that the statement of Indrani Mukherjee, former director of INX Media (P) Ltd, triggered the recent arrest of Karti Chidambaram. During the hearing for the plea for bail, the CBI opposing the bail saying that he was an influential person and has already destroyed importance evidence of the case, therefore he should not be granted bail. The CBI also put allegations that Karti had not been responding to the investigation, which has delayed the conclusion of the case.

While, defending the plea, Karti’s lawyer counter attacked that. “no case under the Prevention of Corruption Act was made out against him since the Central Bureau of Investigation (CBI) had neither questioned any public servant nor made them an accused in the matter, PTI reported.” His counsel has also denied the allegations of Karti tampering with the evidence or destroying evidence. Pulling down on the CBI, he also questioned the Bureau, about the motive behind keeping Karti under judicial custody, when the former had not even sought for any further custodial interrogation.

The INX media case which resulted in the involvement of Karti Chidambaram was, Peter and Indrani Mukherjee the owners of INX media were given foreign investment f around Rs 300 crore and for this, they needed a clearance from Foreign Investment Promotion Board (FIPB). However, according to the norms of FIPB allowed only 4,26crore, but INX violated the terms. This was when Karti came into the picture. The FIR filed against Karti reads, “to get the issue resolved amicably by influencing public servants of FIPB unit of the finance ministry by virtue of his (Karti) relationship with the then Finance Minister (P Chidambaram).”