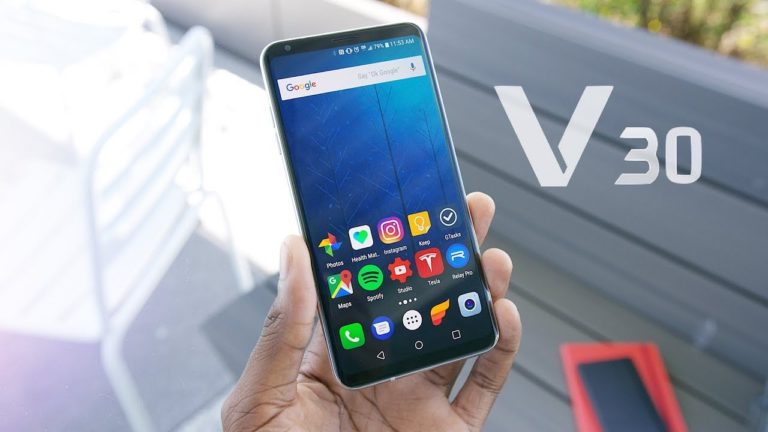 It comes with a sleek design, skinny bezels, and a lot of glass, sort of a hybrid combination between the Galaxy S8 and the LG G6. The idea behind this model was to make the LG V30 LG’s flagship phone, no gimmicks and niche features.

As much as it was a good idea, it could not have the worst timing, almost simultaneously saw the launch of the iPhone 8, iPhone X and the Pixel 2, stealing the spotlight away from LG, however, it is safe to say, that this has been LG’s closets attempt to compete with the high-end brands.

It may look like its predecessors, but there are certain changes in its design, like the lack of a secondary screen, curvier corners, and ultra-slim bezels for a more compact design.

The LG V30 is also the first LG phone to come with OLED, HDR and Daydream VR.

But, what the LG V30 lacks in Display, it makes it up in the overall performance department, as mentioned already, it comes with a Snapdragon 835, and 4GB RAM, app navigation and switching feels smooth and natural, all of it powered by a 3.300mAh battery, but, as usual with LG, it has added wireless charging and waterproofing.

While major players in the Smartphone games are trying to drop the headphone jack, like Google and Apple, LG has decided to build a 32bit advanced QUAD DAC into the V30 and the results have been amazing. Yeah, you can put your Bluetooth Buds and the sound will be just like any other Phone, but with wired headphones, the V30 stands on a league of its own, and that is by far its best-selling point.

It is a welcome surprise that the V30 continues a long tradition by LG to bring always the latest advancements in photography for smartphones, the dual camera pairs a 16MP lens with a 13MP lens, and provides a truly magnificent wide-angle camera.

The LG V30 comes with an updated version the LG UX OS 6.0 and compare to other models, this one introduces a floating bar on the screen that can be easily turn off in the settings, you can set it up in any way you want, display settings shortcuts, apps shortcuts, a mix of both, it is a nice addition you’ll enjoy.

Amongst the many changes in the new OS is the new biometric mechanism for unlocking the V30, the power of your voice, much like with OK Google, you can set your catchphrase and it will automatically unlock your phone.

The LG V30 it’s still a basic smartphone for Android enthusiasts, appealing to all those die hard LG fans, especially for those who want the latest tech specs and an awesome audio quality. The only true problem that the V30 has, it that its competitors have launched some amazing devices.