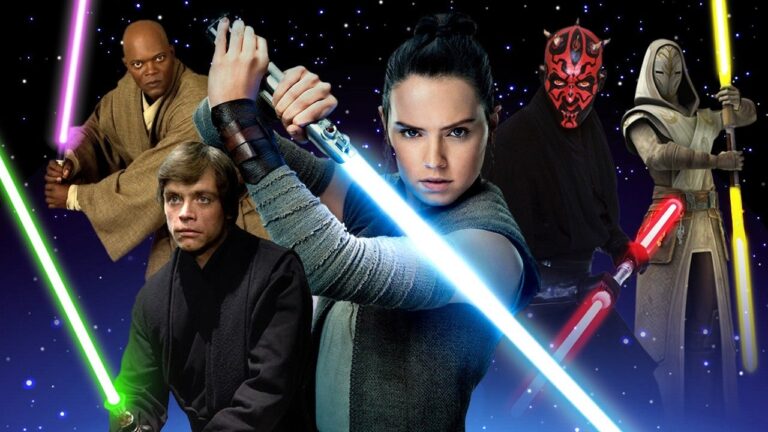 When it comes to movie weapons, the lightsaber is undoubtedly one of the coolest. Who doesn’t love a plasma-filled blade that can cut through almost anything in the world? Since they first graced our screens over 4 decades ago, loads of new lightsaber designs have been introduced and even more, designs are on their way.

Below are some of the most interesting lightsabers from Star Wars (in no particular order).

Ahsoka has had quite the character development. When she first appeared in Star Wars: The Clone Wars as a naive Padawan, she wielded the traditional green lightsaber. However, as the series progressed and she became more strong and more confident in her abilities, she switched her combat style to Jar’Kai, which focuses on the use of dual sabers.

By the time of the Star Wars Rebels show, Ahsoka further set herself apart by being one of the rare Jedis to wield white lightsabers. The white color of her blades represents her neutrality after leaving the order.

When it comes to the most interesting lightsabers from Star Wars, no list is complete without Darth Maul’s double-bladed lightsaber or saber staff. The saber which was first introduced in the Phantom Menace many years ago had a lot of fans awed at the concept (something like that had never been done before). The addition of the saber staff practically revolutionized the Star Wars universe.

The purple saber first appeared in Star Wars: Episode II Attack of the clones and the purple color represents nobility and wisdom. It makes sense since Master Windu who was considered the wisest member of the order was the only Jedi capable of wielding it. The rarity of this lightsaber makes it quite the collector’s item.

The Star War Sequel Trilogy introduced us to this unusual crossguard saber. The fact that this lightsaber has three blades, a main blade, and two smaller ones (quillons), immediately drew attention. The saber is a reflection of Kylo Ren’s unstable nature, but the two extra blades do give him a battling advantage.

Although this is one of the very first lightsabers introduced, it remains a fan favorite. The red, shadow-like lightsaber which is wielded by Darth Vader is quite infamous across the galaxy.

Before defecting to the Sith, Count Dooku was actually regarded as one of the finest swordsmen in the galaxy and he wields a lightsaber with a unique design. His saber’s hilt features a curved and unique design that allows for very precise strikes and motions. This saber design further enhances the fencing-like style of fighting, which Dooku is a master of.

How to get one of These Lightsabers

If you like any of these interesting lightsabers and wish to either add them to your collection, cosplay or live out your fantasy of engaging in a lightsaber duel, there are several ways to get your hands on a replica.

Some comic book stores have lightsaber replicas as part of their Star Wars collector’s items, so you can always check them out.

There are also a lot of companies that manufacture and sell replica lightsabers. You can choose to order from them directly. As an added benefit, many of these companies offer customization, so you can add your own creative touch to the lightsaber replica.

Since they were first introduced in Star Wars Episode IV, A New Hope, the lightsaber has seen a lot of development from its traditional design, and above are some of the most interesting lightsabers that have been introduced to us over the years.