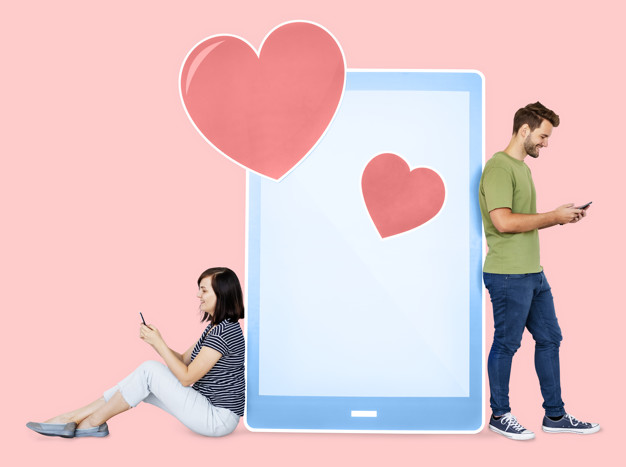 The Internet has become the most used medium of human communication. It has allowed people to express their emotions and other human conversation through the internet. The same thing has amplified the lovebirds to cuddle with their partners. Smart devices have become common and they have been playing a crucial role to get all these things done according to the demand of youth.

Few people may think that online dating is the latest approach but the concept behind this is not. There are various dating apps, social media channels, and websites that provide ample solutions for the people who are trying to engage with people. These become new tools to find love from the pool.

People, who think they are not suitable and not capable of handling any type of relationship, send themselves to the spin worrying about the length of time and it is taking a love interest to message back. However, there have been the equivalent traumatic episodes for several generations.

According to research from Betway, the first lonely-hearts advertisement appeared in the year 1695. This happened just five years after the modern newspaper came into play. One of the initial advertisements was placed in the UK. The person was only 30 years old and was searching for some good young and charming girls. It was all about having 3,000 pounds at that time and the message ended with good luck mate.

Apart from that period of time, in 1965, a group of Harvard students employed IBM 1401 computers in order to make Operation Match. This was the first matchmaking service in the entire USA and it happened just six years after the technology was invented. This was similar to the present-day dating apps being availed by various social media sites.

While talking about the present-day social media platform that has been working as a dating platform, it was MySpace which was launched in the year 2003 with Facebook which emerged a year later having originally a life and started a “Hot or Not” community for the Harvard University campus. Various dating websites including PlentyOfFish, Badoo, and OkCupid have been launched within three years of MySpace launch.

In the year 2012, both Hinge and Tinder joined the love-in and the popularity of these sites has been skyrocketing. They become the top platforms due to the popularity of smartphones and tablets all over the world. In the year 2018, Tinder has almost fifty million users around the world and they have got a whopping 20 billion matches from its initiation.

There are also romantic social media platforms like Badoo which has clocked almost 500 million users which is almost 1.5 times the population of the USA. As there are a number of dating apps available in the world, the choice of these apps is unlimited and users have a lot of options available to choose their partner from these apps. Different people from different countries have different choices and they follow their preferred dating sites accordingly.

Impact of the Pandemic

We can notice the overall increase in the popularity of dating apps in recent years. The year 2022 was especially important for these platforms. The main reason is related to the fact that most countries introduced lockdown measures due to the pandemic. Therefore, people had to stay at home for a longer time, while places, where people were going to hang out with friends and meet new people, stayed closed for over a year. There are still many limitations in a lot of countries.

In that matter, it is not a surprise that there was a huge increase in popularity. There was no other way to meet new people and potential partners then trying to find someone over social media or dating apps. The dating apps like Badoo and Tinder are much more convenient than social media since they are specially designed for people who are looking for partners.

Moreover, the increase is mutual for all countries, but there are some differences related to the habits of uses. For example, it is noticed that people in Spain are more interested in online video chatting, while users from the UK check out their profiles more often during the day. When it comes to the United States, we can say that dating apps are the most popular in this country. An average user can get more than 6 connections every day.

The popularity almost doubled during the last two years. There are many advantages of using dating apps. For example, besides the lockdown measures, there are many people who have issues with approaching to someone and making the first move. Everything seems to be much easier when you can do that over an app instead of doing it in public. It is especially important for people who are less confident.

For instance, people might feel embarrassed and ashamed if someone refuses to have a chat with them while in public. On the other side, it is much easier to speak with other people over online platforms, and even less-confident people won’t have an issue with someone refusing to continue to chat with them. The ability to meet new people this way is completely changing the traditional aspects of looking for new partners.

Also, you can use these apps when you are traveling, to meet new people, or find a one-night-stand. You can set your preferences and describe yourself. There are some issues as well, especially when it comes to honesty. That is the main reason why there are still many people who are against this method of meeting new people. However, the numbers are saying that the percentages are increasing by each year.

It is important to determine the main reasons why you are using these apps, and keep in mind that others might not share the same interests. For example, if you are interested in finding a partner for a serious relationship over Tinder or some other website, you have to be aware of the fact that a lot of people are using it only for fun.