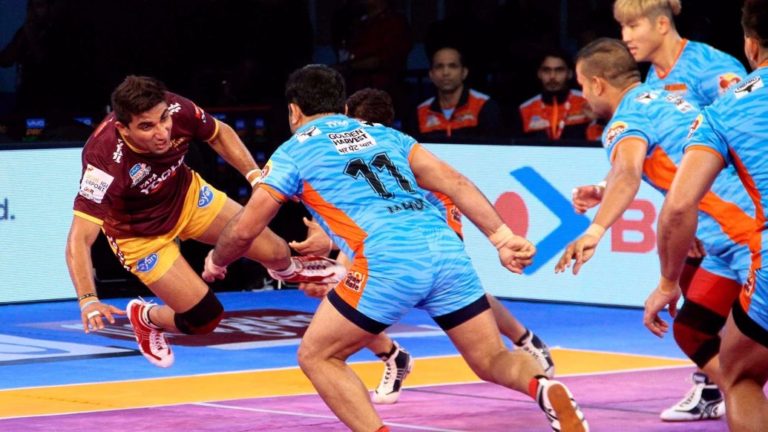 On the thirteenth day of Pro Kabaddi League season 6, the first match of the day was U. P. Yoddha vs Bengal Warriors.

As this season know Bengal Warriors won all their two matches, another side U. P. Yoddha won one match and lost three matches out of four matches in zone B.

U.P. Yoddha won the toss and selected the choice of court. Warriors’ Jang Kun Lee raid two times and repeating the first raid and with this in three-minute score 0-4 on the table.

An unsuccessful raid from Rakesh Narwal and with this Bengal Warriors was all out trailed by three points. From 27-18 to 32-32 score and with this U. P. Yoddha was all out at last 10-minute match. What a comeback.

37-37, 38-38 and at end score 40-40, U. P. Yoddha hold Bengal Warriors to a thrilling tie. At last minute the last raid Prashanth Kumar with crucial bonus point helped to make a match in the tie.

2nd match of the day: Puneri Paltan vs U Mumba

Both teams with three wins and one tie but U Mumba with two lost while Mumba didn’t taste lost. Puneri Paltan already tasted two lost in this season.

U Mumba won the toss and selected choice of court. Paltan’s Nitin Tomar with successful raid and U Mumba all out with score 11-8 on the table.