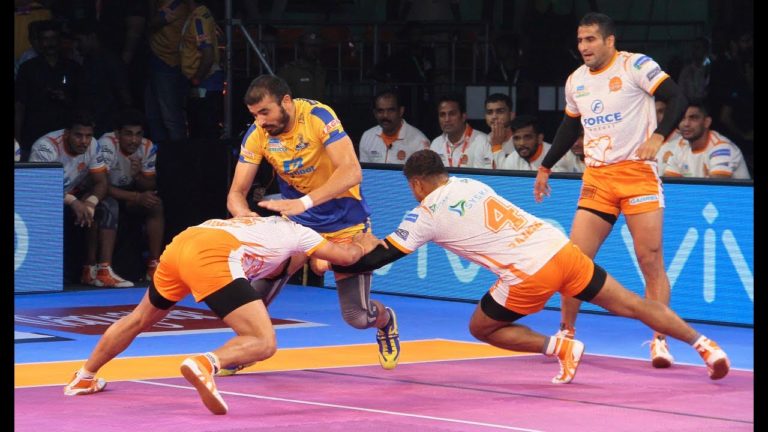 On the Fifteenth day of Pro Kabaddi League season 6, the first match of the day was U Mumba vs Telugu Titans.

As we compare point table score, both teams won three matches and one lost only difference is U Mumba has one tie in their account.

U Mumba won the toss and selected choice of court. U Mumba’s Siddharth’s successful raid and with score 13-7 on the table, Telugu Titans all out. At halftime Siddharth Desai’s last raid and score 17-12 on the table. U Mumba with 5 point lead at halftime against Telugu Titans.

After 5 minutes, Telugu Titans got all out again the second time with score 25-16 on the table. Rahul Chaudhari raids successfully and completed his 700th raid point and becomes first in PKL history to achieve and score 28-18 on the table.

At last 15 minute, Telugu Titans all-out third time with score 36-18 on the table. From halftime, U mumba gave a signal and they won the match with 21 point lead with score 41-20 on the table.

2nd match of the day: Puneri Paltan vs Tamil Thalaivas

Puneri Paltan won the toss and selected choice of court. With full competitiveness by both team score 2-2, 3-3, 4-4, 5-5, 6-6 on the table describes winning Paltan and Thalaivas defence as they won only one match. Before 5 minutes of first-half Puneri Paltan all out with score 11-15 on the table.\

At halftime score 15-16 on the table. Last 8 minute before, with Thalaivas’ Jasvir Singh successful raid Puneri Paltan all out with score 20-29 on the table.

Finally, after five lost Thalaivas came back in the game, Tamil Thalaiavas won with 5 point lead with score 31-36 on the table. Puneri Paltan lost after back to back win.