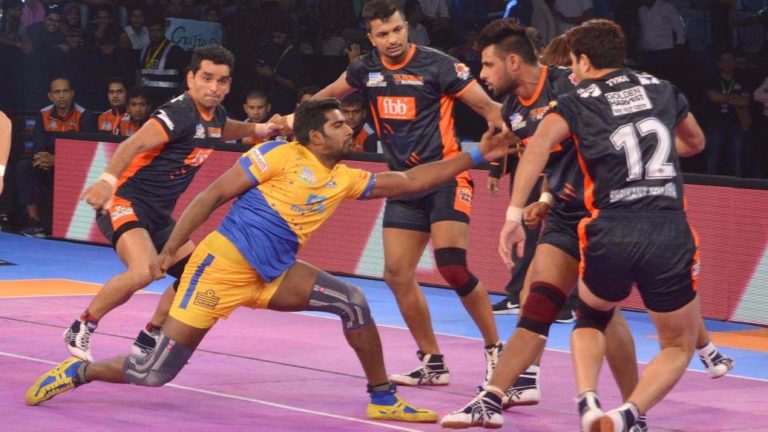 Patna Pirates lost their first match against Tamil Thalaivas on the opening match of the league. Pirates came on the field with hope to achieve their win.

On another side, U.P. Yoddha won their match against Tamil Thalaivas, Tamil Thalaivas again what a coincidence! Yoddha came with winning spirit for the clash with Patna Pirates.

One team won and one team lost their match against Tamil Thalaivas, and now both team against each in their second match. Magical coincidence with a magical thrilling match.

U.P. Yoddha won the toss and selected the choice of court. After ten Minute Yoddha easily managed to 6 point lead 9-3. After this moment Patna Pirates was back to increase their point in every minute of the match. At halftime, Patna Pirates was with 1 point lead with score point 20-21 against Yoddha.

Bengal Warriors Won the toss and selected the choice of court. After 10-11 Minute score was 10-10 as a mistake from Thalaivas’ Manjeet revives 3 Bengal Players. At the halftime, Tamil Thalaivas were all out and Bengal Warriors lead with 3 points with score 15-18.

At 8 minute after halftime, Manjeet failed to touch and again Thalaivas all out. Warriors with 9 point lead with score 19-28. From this, every minute Bengal Warriors managed 9 to 10 point lead and at last Tamil lost their last home match by 9 points. Bengal Warriors won their first match of PKL 2018.