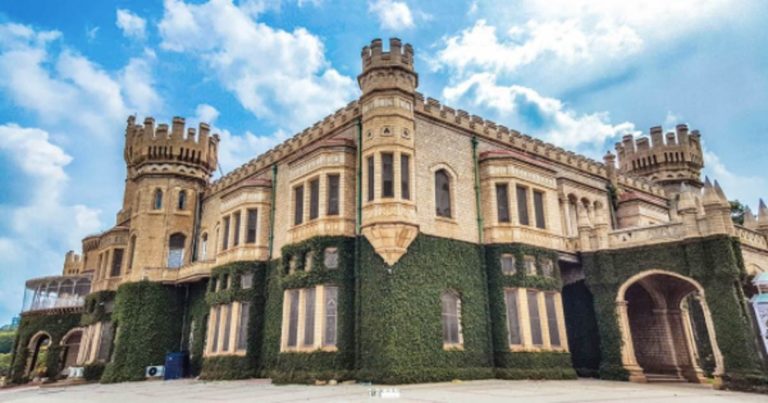 Bangalore, is the capital of Karnataka in the south of India. The city has several names like IT hub of India,Silicon Valley of India and garden city. Bangalore was famously known as Pensioners Paradise ,before the IT revolution began, Now, it’s a spectacular combination of present and past. Bangalore may not be rich in iconic attractions as other cities,but a great mixture of history, spirituality,culture, architecture,and nature. Here are the five tourist places in Bangalore.

It was Built in the year 1887 by the famous Chamaraja Wodeyar, Bangalore Palace has been inspired by the  Windsor Castle in England. This palace has architecture of Tudor-style, with tall towers and arches.It has lawns, and wonderful interiors with wood carvings The people of the royal family lives there. Family photos, memorabilia, and portraits are on the display. The opening time of the palace starts from morning 10:00 am until evening 5.40 p.m. The fee is around 200 rupees for locals and around 500 rupees for foreign tourists.

It is situated inside the Fort area of Bangalore, Tipu Sultan’s Palace was initially built by Chikkadeva Raya using mud. Later on, Hyder Ali reconstructed the palace in Indo-Islamic type of architecture. Tipu Sultan,his son completed it in the year 1791. The proof of Tipu Sultan’s religious tolerance is the Hindu temple which is seen in the courtyard of that fort . The palace is opened for public from 8.00 a.m.in the morning until 5.00 p.m in the evening. Ticket cost is around 20 rupees for Indians and 300 rupees for foreigners.

This garden was used as a private garden with a Mughal-style for the royal rulers of the city.  Hyder Ali established in the year 1760 and later it was extended by Tipu Sultan. It covers more than 200 acres, and got its name from the bright red roses that blossom throughout the whole year. The most diverse species of plants are found in this garden.Its main attraction is the majestic glasshouse which was built in the year 1889 to honour the Prince of Wales. It was inspired from the architecture of the Crystal Palace built in London.

It Occupies an area of about 350 acre in Bangalore. Cubbon Park is a very sought after place for people who walk and jog ,for nature lovers and for anyone who wants to roam around. The park had been given its name after the Banglore commissioner , Sir Mark Cubbon. Many beautiful and ornamental flowering trees are present in this park.,They are exotic as well as indigenous.The special play area and aquarium present inside the park are a major attraction for kids.

This beautiful lake called Ulsoor Lake is covers over an area of more than 120 acres in the city, near to M.G. Road. Kempegowda II constructed this lake. Karnataka State Tourism Development Corporation provides boating facilities.Walking track is also available around the lake.