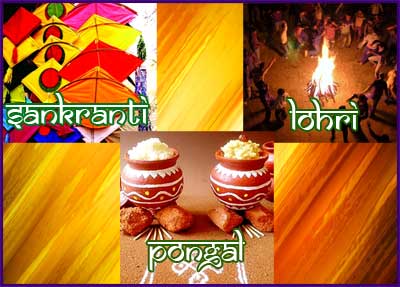 The Indian festival of harvest known commonly as Pongal is celebrated all around the country. This is exclusively done to thank and enjoy the food that now stands grown. This festival is celebrated throughout the world in different ways.

In Indian culture, the harvest festival is not only regarded by different names but also the celebration varies from region to region according to lifestyle. Also, the harvest festival in India takes place during various months of the year in various regions. But there is always something common in the celebration that maintains the essence of Indian culture throughout length and breadth of this incredible nation. Read on to know all about India’s first harvest festival of the year which goes by various names as Pongal, Makar Sankranti, Lohri and such.

Pongal is a harvest festival celebrated by Tamilians throughout the world. The festival is especially dedicated to thank Sun God (Surya Dev) for a prosperous harvest and is popular among Tamil people of the India’s Tamil Nadu and Puducherry. Apart from India, this festival is popular in countries like Sri Lanka, Malaysia, Mauritius and some others.

Pongal is a four-day festival which corresponds to the dates January 14 to January 17 of the Gregorian calendar. People cook Pongal– a dish cooked out of rice and milk as main ingredients- and offer to Sun God, usually placing it in sun outside. There are two varieties of Pongal dish made out of rice, one sweet and other spicy.

Dedicated to Sun God, Lohri is another variation of the harvest festival; celebrated in the northern part of India by Sikhs and Hindus.  It is tremendously popular in region. The Punjab folk festival- Lohri signifies the celebration of of winter crops as well as a thankful remembrance to the Sun God for harvest.

Lohri celebration is pompous with , Lohri songs, Punjab folk dances like Gidda, and variety of food items. In order to celebrate Lohri with friends and family, people distribute f items like til (sesame seeds), (jaggery), (popcorn), (peanuts) and with each other.

Various parts of India like Andhra Pradesh, Karnataka, Maharashtra, Telangana celebrate Pongal in the name of Makar . The sun transits into Capricorn (Makara) zodiac on this day . The significance of this is the end of winter solstice and of summer.

On the 3rd day of the festival Kanuma, they worship to honor them for helping with farming.