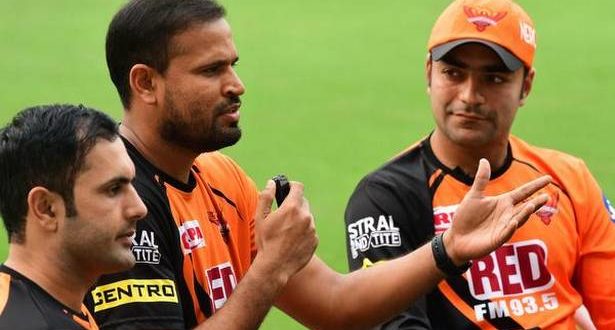 Today’s match was between Rajasthan and Hyderabad, which was being held at Rajiv Gandhi International Stadium, in Hyderabad which commenced at 8:00 p.m. IST. Sunrisers Hyderabad won the toss and chose to bowl first.

Invited to bat first, Ajinkya Rahane and D’Arcy started the innings for Rajasthan Royals with Bhuvneshwar Kumar starting the bowling for the Sunrisers. Rajasthan Royals did not have a decent start as opener D Arcy Short was run out for 4 by Kane Williamson in the very first over. The second wicket fell in the 7th over with the skipper being caught by Rashid Khan.

Sanju Samso batted well being standing at crease for 43 not out and took RR to 71/3 at the half way mark. By the 14th over the Royals were down at 94/5 and it was time for a strategic timeout. At the end of 16 ove RR were 106/6 with the final four overs to go which failed to build the momentum needed to get a fat score and wickets quickly fell for Rajasthan Royals and were limited to 125/9 with Rashid Khan bowling well for the Sunrisers.

The opening partners of Sunrisers were Wriddhiman Saha and Shikhar Dhawan. In the first over the bad luck for the Royals continued when Ajinkya Rahane dropped Shikhar Dhawan at the slips who eventually turned out to be the top scorer for the Hyderabad Sunrisers. Rajasthan Royals saw a glimmer of hope when they struck gold getting Wriddhiman Saha out early at 1.3 overs with Jaydev Unadat doing his bit. On the last ball of the second over Dhawan smashed a six the first one of the match.

At the end of 6 over’s the Sunrisers were sailing with the score at 57/1 at end of power play. The batting prowess continued and at 7.2 overs Dhawan blasting boundaries it was 72/1 with him making his half century off 33 balls at 9.1 overs with SRH at 83/1. It was a nightmare for the RR bowlers as no wickets were going down and at this point it seemed without a doubt that RR was losing the grip.

At the tenth over it was 89/1 and SRH reached the century mark by the 12th over, and at the fourteenth over it was 120/1 for the Hyderabad Sunrisers with just six runs more to achieve the target score.  The match was over for Rajasthan Royals at 15.5 over’s with the Sunrisers putting up an impressive batting partnership with just one wicket down. Shikhar Dhawan and Kane Williamson added an unbeaten partnership of 121 runs and thrashing Rajasthan Royals at home.