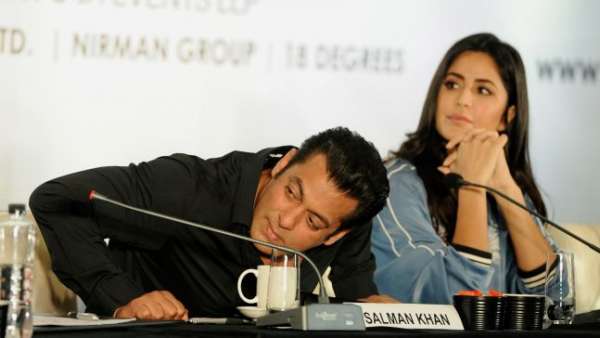 Well, when it comes to Bollywood, anything or nothing for that matter can become a viral news in a matter of seconds like a fire in the forest. Something similar happened with Salman Khan and Katrina Kaif in Pune, while they were sharing the stage with Sonakshi Sinha and a few others for Daabang promotion.

There have been many rumours regarding the relationship between Salman and Katrina, though none of them has ever said anything about it in public. But then, if it is B-town talks, it does not necessarily have to be true. So does not matter what relation do the actors really share, it was something more than friends according to the news and of course social media.

Recently the couple has once again made it to the viral video category, with their, sharing the same coffee mug video getting wheels on fire. During the event while Sonakshi was speaking, according to the video, Salman sipped from the coffee mug and then Katrina had a sip from the same mug. Though this could just a casual gesture between two good friends, but like it has to be, the focus shifter from Dabbang promotions to ‘same coffee mug’. Salman and Katrina have known each other since Katrina’s debut film ‘Maine Pyaar Kyun Kiya.’ Both of also worked together in the film and from there the talks got the fuel that they were in a relationship.

Also during the event, another thing that caught the attention other than the mug was Katrina’s revelation. When questioned about how she handled herself in the Bollywood industry which was new to her, the actress responded, “I educated myself (about the industry) but I might write a book (on it), so I won’t waste the answer now. I seriously might write a book.” She further added “You need to have a balanced attitude to life, need to accept that failures, hardships and hard times -for me definitely – they are the biggest teachers. They (failures) are the biggest steps. Once you get there, then you reach higher. You need them. Hardship and failures taught me to evolve and reach the next step.”

Well for the Bollywood divas, it is not new to share their experiences with the world about their journey in the film industry. Each one of them has a different story, and sharing their hardship with the world is something that Asha Parekh and Hema Malini have also done. After these two amazing actresses, it is now Katrina, who wants to pen down her story of a road to success in Bollywood. Well, the interesting thing in her book to read would be about the mention of Salman Khan. Or probably this might not come out the public. Only time can say what the words of her book speak. For the time being, the shared coffee mug is speaking for the couple.

Talking about the work front, Katrina will soon be seen on the much awaited big-ticket movie, Thugs of Hindostan. While Salman is busy with his next movie Race 3.