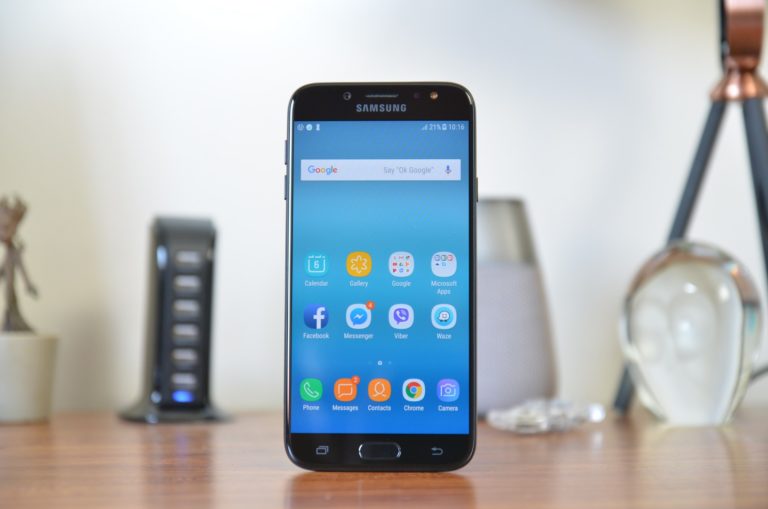 It is called 2017 by some, Pro by others, but this device with different names goes Pro for countries such as India and Brazil and, also, for regions like South East Asia, each version has a slightly further localized version.

The similarities between both versions are remarkable. But some differences give the J7 Pro some superiority in certain aspects. Starting with a Super AMOLED screen at 5.5-inch with FullHD display. With a processor that comes in 2017, the 14nm Exynos 7870 was ahead of its time back then and it will be relevant in 2018 too. And there are two versions of this product one with 32 GB storage and another with 64 GB. Both versions come with microSD slot and dual SIM cards.

Respect to Battery life, it is a good one giving more than a day for voice calls, approximately 18 hours of looping videos and around twelve hours browsing the web over Wi-Fi. According to testing, the phone would give the user an overall Endurance rating of 107 hours. With the Always On Display (AOD) function, the phone will turn off completely if the device remains in the user´s pocket, in a drawer or face down. The big setback from this large battery is the charging time; taking longer than the usual cellphones on this range.

On the security area, the device offers the user several options to unlock it such as iris scanner and facial recognition. It also has a fingerprint reader, even not a fast one, but a very useful feature in terms of secure the access of strangers to the phone. Furthermore, it offers the owner the possibility for unlocking the device with a simple swipe, a PIN, pattern, or a password. These features can be used as a backup of the fingerprint reader.

Additionally, the device is a good business or academic companion for including apps from Microsoft including Word, Excel, PowerPoint, OneDrive, and Skype. This is a good choice for those interested in working their documents without being in front of a computer.

On the Multimedia field, the phone offers you the possibility of grouping the pictures by histories, a good way to organize your albums and memories. Referring to music and audio, the device has Google Play Music as a default player for the tunes a user keeps on the smartphone as well as the one store in the cloud. Despite having none video player installed, the videos are shown through the gallery, but you can download apps to handle and even edit videos on the device. Complementing these features, the sound from the product is very accurate and the volume is great, even barely above average.

The 13-megapixel camera offers the possible owner a good quality performance on photos and video, especially when the device is used on good light conditions; but there will be some issues when the illuminating conditions are not optimal. Additional to this, the selfie camera will show some blur at arm’s length, especially at full arm extension.  Overall, photo and video don´t go beyond the usual performance of smartphones on this range.

Finally, the device offers a good set of features and it is a good product for those interest on having a smartphone with a good video and photo quality and also as a good business or academic companion.