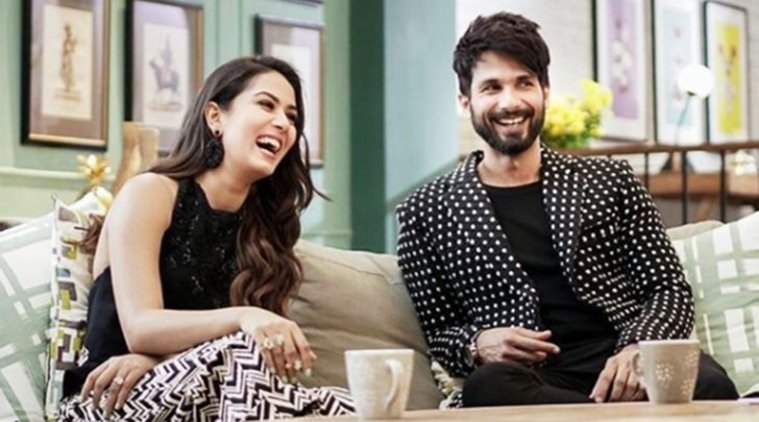 One of Bollywood’s much-loved real-life couples, Shahid Kapoor and Mira Rajput have once again shown their special bond on television. It has almost been two years now that the couple is married and they also have a beautiful and cute daughter, Misha Kapoor. The love and compatibility shared by the couple are setting goals for other Bollywood couples as well. Being a part of the B-town and also g=having a successful marriage is rare to find.

The couple will be seen for the second time on small screen, in the second season of the talk show Vogue BFFs hosted by Neha Dhupia. They first shared the couch on the small screen at Koffee with Karan, hosted by Karan Johar. The couple’s chemistry can be clearly visible on the television as Mira does not leave any chance to show her love for Shahid. The grand finale episode of Vogue BFFs, featuring Mira Rajput and ShahidKapoor will be aired on Saturday on Colors Infinity.

Mira Rajput did not flaunt anything and not for a second make it feel that she was not a part of the industry, just like had kept to her real self in her first appearance on television with Shahid. As she got herself engrossed in the chat sessions with Neha, the star’s wife opened one secret after the other, not even leaving the bedroom talks. During the show, when she was questioned that amongst the two of them who was more boring at Bollywood parties? She did not take a second and promptly responded Shahid. But was also quick to add, ‘just kidding’, after seeing him roll his eyes.

During the show, she also narrated the incident when she literally threw Shahid out of the house saying that she could not take it anymore. It was during the shoot of Padmavat, Shahid came back from the shoot at 8 in the morning and slept till 2. She said that she completely understood that he needed privacy and peace after the hard night’s shoot, but that was the time when Misha was fully awake and full of energy. She said that she could not restrict Misha nor she could ask Shahid to adjust and that was the time she said that she could not take it anymore. “He (Shahid) would come home at 8 AM and wake up at 2 PM in the afternoon. I completely get that he needs silence during those hours because it has been a tough night, but Misha is at her best at that point, wide awake and playful. Shahid wouldn’t say anything but I know it’s going to tire him and I know I can’t put too many restrictions on her either. That was getting to me at a point and that’s when I told him that I can’t take this anymore, said Mira.

Talking about intimacy and the chemistry between Mira and Shahid, the host, in a segment of the show titled ‘Scary Spice’, asked them about the best position in bed. Well, Shahid was a bit shy to answer that and preferred passing it. But Mira said it all, “I think he is a control freak. He is always telling me what to do.” Well, this is not the first time the couple is talking on television about their intimate scenes.
Make sure to be free on Saturday to watch the episode on Colors Infinity.