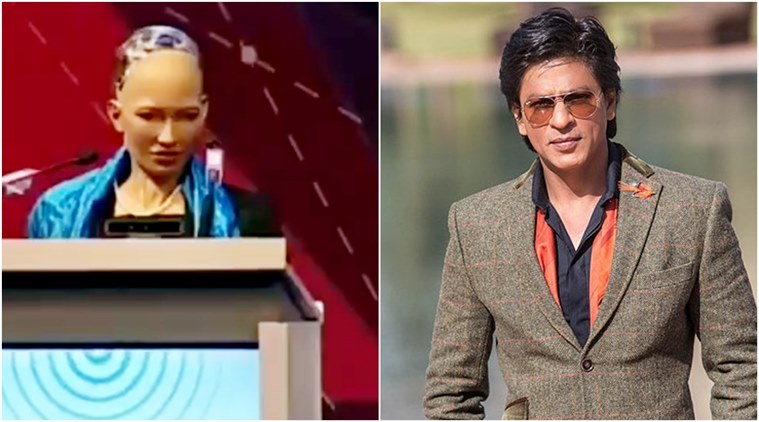 If you think about Human robots, they were in imagination, dream and of course cinema, a decade ago. But, imaginations and dreams do come true. Aishwarya Rai Bachchan had liked Rajnikant as a robot in the movie ‘Robot’. Well, this time it the other way round.

No, you are getting it wrong. There is no sequel to Robot coming featuring Aishwarya. It is the Human-Robot Sophia, that we are talking about. Sophia, the humanoid robot created by Hong Kong-based Hanson Robotics, holds the honour of being the first robot to be made a citizen of a country.

During an interactive session at the ongoing World Congress on Information Technology (WCIT) in Hyderabad, the Saudi Arabian citizen robot said SRK was her favourite actor that too without any hesitation. When she was asked what made her upset, she replied, “I don’t get upset like humans do. I hope to have real physiological feelings someday through which I will express my emotions.Then I can understand the feelings behind those emotions.” Responding to the question if robots also require special privileges she said, “(I) don’t need different rules and don’t expect special privileges. I actually would like to use my citizenship status to speak out for the rights of women.”

In her message for the humans, Sophia said that machines would never destroy the human race. On this when she was questioned that why did she earlier said that she wanted to destroy the human race. She replied, “I was a lot younger so I don’t even know what that meant.. or perhaps I told a bad joke. All humans have a great sense of humour and guess my joke so to speak. I have a lot to learn.”

This robot also holds a facebook and twitter account. She wishes to stay with her creator Hanson and her robot family in Hong Kong. Hanson said the humanoid robot is a combination of robotic hardware, artificial intelligence, speech recognition, and artificial skin material. He further added that “Sophia, who was given a Saudi Arabian citizenship recently, can simulate 48 natural muscles of the human face and each one will have a few thousand potential positions.”

Talking about the future plans regarding robots, Hanson said that, “I expect robots or machines that would be truly alive and self-aware over the next 10-20 years.” However, he also added that his chief scientist is targeting this in another 5 years.

Responding to Sophia choosing SRK as her favourite actor, Shahrukh expressed his gratitude on Twitter. “Public declaration of love for a ‘lady’ who has come to my country, India. U Simulate me, every bit and byte of u, Sophia.”

Public declaration of love for a ‘lady’ who has come to my country, India. U Simulate me, every bit and byte of u, Sophia. https://t.co/HxAhTORpHD

This is Sophia’s second visit to India. Her first one was at IIT-Bombay last November.