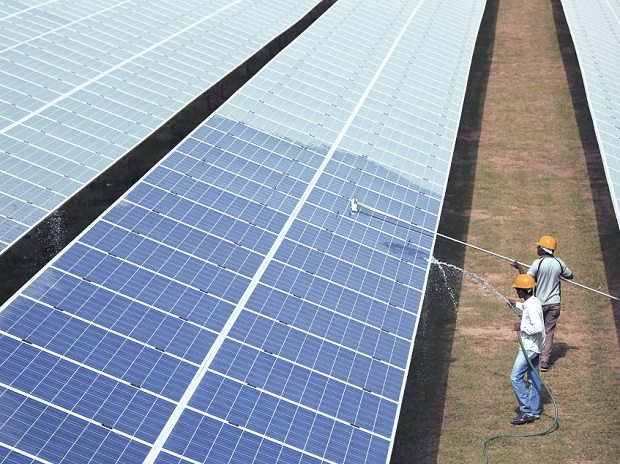 The solar power generation capacity in India has surpassed 10K MW, which is a 3-fold jump in a matter of just 3 years as the government is pushing for the renewable energy sources to meet the increasing demand. This milestone was achieved as NTPC Limited, the nation’s biggest power producer went on to commission the 45 MW solar power project in Bhadla, Rajasthan.

India has now surpassed the 10K MW of solar power capacity finally. It is more than 3-fold increase in a matter of just 3 years. India’s solar power generation capacity basically stood at around 2,650 MW in the month of May 2014. Close to 14K MW of the solar projects is now under the development stage and close to 6 GW is now set to be auctioned very soon.

In the year 2016, close to 4 GW of the solar capacity got added, the quickest pace till date. As per the power ministry estimation, around 8.8 GW capacities is now likely to be included in the year 2017 that will have nearly 1.1 GW of rooftop solar installations.

The Indian Government is seriously targeting around 100 GW of solar and around 60 GW of wind energy capacity by the end of year 2022. The total renewable energy generation capacity will be envisaged at around 175 GW by the end of 2022.

Sometime last month, the lesser capital expenditure and the cheaper credit had actually pulled down the solar tariff to a brand new low of INR 2.97/unit in the auction that was conducted for the 750 MW capacities at the Rewa Solar Park in MP (Madhya Pradesh). The auction was even conducted by the joint venture of the Madhya Pradesh Government and SECI (Solar Energy Corporation of India).

In the previous year, the solar power tariff had actually dropped to a completely new low, with Fortum Finnsurya Energy (Finland-based company) quoting nearly INR 4.35/unit to get the mandate to install the 70 MW solar plant under the NTPC’s Bhadla Solar Park Tender.

In November 2015, the tariff had actually touched INR 4.62/unit following the aggressive bidding by the US-based SunEdison, the globe’s largest developer of the renewable energy power plants. India is now clearly marching towards its main goal of achieving the 100 GW of solar power by the end of the year 2022.  Many private companies are also coming up with a lot of strategies to achieve this goal. This will certainly transform India into a much better country and may even push India as one of the best and developed countries in the world in the coming years.