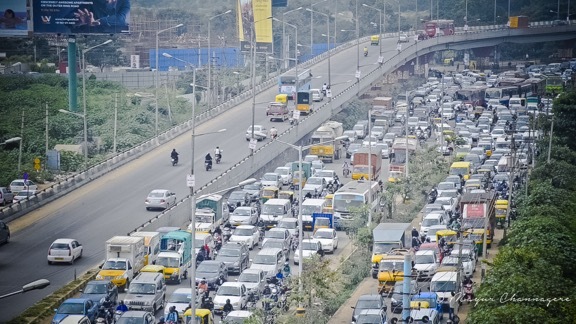 Outer Ring Road is one of the most busiest roads in Bangalore, as most of the techies use this route to reach the tech corridors. Thousands of commuters taking up this route daily had taken a sigh of relief after the road was opened for use months of delay. They were happy that now they will be able to reach their homes and offices on time. But the opposite has happened, and the three deadly speed breakers on this road are solely responsible for the piling up of traffic on this road.

The Bruhat Bengaluru Mahanagara Palike (BBMP), to improve the most used route had replaced the conventional road with a white-topped surface. However, the smooth ride did not go very far as the commuters ended up waiting in long queues for the traffic to get cleared. Three, quite rough and abrupt speed breakers have been placed near the B Channasandra bridge. Two of them are in the Hebbal-KR Puram route, and one in the opposite direction. Though the BBMP thought of making conditions better, it turned out to be the other way round. Because of these speed breakers, during the peak hours, traffic gets lined up for up to 1 km.

The speed breakers are also not the normal ones. They are the rubberised ones which are 50 mm in height. So to cross them, whether like it or not, you will have to slow down and get to gear

1. This is the major reason for the traffic jam in the area. Also, to avoid the breakers, heavy vehicles like Volvo buses, enter into the service lane, which is only adding to the problem. A techie who very frequently uses the road has complained that “All our dreams of reaching office/home sooner have been shattered by these speed-breakers. On an average, it delays us by 10-15 minutes.” Another commuter of that route, Harish Kumar K, said, “I don’t understand why you needed a speed-breaker here. So many motorists try to skip these humps by diverting into the service road; this not only leads to jams on the main road but also blocks the service road.” The former office bearer of the Outer Ring Road Companies Association, Gopinath Poornaprajna said, “People on the ORR are facing a lot of trouble due to the new speed-breaker and it has impacted the movement of traffic on the IT corridor. We already have a slow-moving traffic, this speed-breaker has further slowed us down. People using the road have written many letters to the authorities to remove this.”

The commuters are sending SoS messages and emails to the authorities related to remove the speed breakers immediately.

A similar type of case had happened in the past also. A speed breaker was placed at Tumakuru road (near Yeshwanthpur railway station), which was also creating a kilometre long traffic jam. Ultimately it had to be removed. Even the traffic policeman posted in the area complained that they were facing problems in managing the traffic due to the breaker. However, the BBMP stated that it was necessary to put a speed breaker there because the traffic was merging ahead.

Regarding the problem of speed breakers causing traffic jams, Urban expert MN Sreehari demanded the removal of the hump immediately. Citing the rules, he said, “As per the directive of the Indian Road Congress, building speed-breakers on road, especially expressways are illegal and also unscientific. Most experiments with speed-breakers in the different part of the country have proved that it leads to traffic congestion and also at times grievous injury to a motorist. There are other ways – like coming up with a yellow warning line or some kind of traffic control. Countries such as South Korea and Japan have also experimented with laser beam lights and if required that can easily be installed in India. Speed-breakers are obsolete and illegal.”

According to the rules stated to build a speed breaker, all the road humps are to be built only as per the specifications of the Indian Road Congress. The specifications include, that in residential areas and minor roads, the maximum height of the breaker should be 0.10 m and 3.7 m width. Apart from this at least 40 m before the breaker a signboard should be placed reading SPEED BREAKER AHED in bold letters so that the commuters have enough time to slow down. As per the experts, rubberised speed breakers should not be used on the roads, as they are designed to be used only on internal roads or campuses. They say that using this type of speed breakers on heavy moving traffic roads can be dangerous, especially for the two-wheelers at night.

The union government has also issued some guidelines regarding the building of speed breakers. It says that building if unscientific speed breakers are the major cause of accidents and hence should be avoided. According to the data of 2014 and 2015, around 11,008 and 11,084 people respectively lost their lives due to speed breaker accidents. Only in Karnataka, the figures were 1,114 people in 2014 and 2, 310 in 2015. Also, speed breakers are not advisable for highways or major busy roads like the Outer Ring Road (ORR).

3 thoughts on “Commuters Get The Shock Of Deadly Speed Breakers On Outer Ring Road, Bangalore”