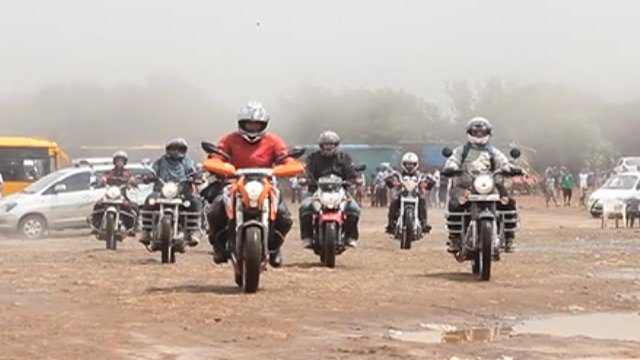 Bengaluru: The bike riders in Southern states seem to be upset about limiting the speed to 80 km/h. The Racing enthusiasts and people who drive responsibly argued that this proposal is a self defeating idea. A few days back, Transport Minister HM Revanna had stated that the Southern States were thinking to install speed governors in bikes and maybe cars as well. It is likely that a proposal regarding the same will soon e put forth in front of the union government. However, the bikers do not seem to be very happy about it.

Though it is just a proposal yet and the implementation is not clear, it has made the racing enthusiasts very unhappy. They are saying that if the speed is limited and speed governors are installed it will kill the excitement of riding on national highways and expressways. According to the bikers of Bangalore, this action, if implemented, by the government will take away the charm of biking. The proposal of limiting the speed popped up back in 2013 when in a tragic incident 43 people lost their lives.

In 2013, Jabbar Travels Volvo bus caught fire on the Bengaluru-Hyderabad route and killed 43 passengers in it. After the incident, many transport companies have installed the speed governor device and the next step to avoid such tragedies would be installing the speed governor in bikes and may be cars as well.

However, it is still not clear whether if the proposal is passed, it will be applicable for high powered bikes too. The owner of a city based garage, Art of Motorcycles, in Bangalore, Zoheb Muteeb said, “This speed limit on national highways will not work at all. We have some beautiful expressways where speed limits of over 80 kmph are permitted. Secondly, heavy and bigger two wheelers need balancing and that can only be done with a minimum speed of 90-100 kmph. The move will greatly affect the market for premium motorcycles and can cause losses.”

Priyamvada Saradhi, a motorcycle racer, also agrees with Zoheb. He questions that why there are not enough driving schools in India to create awareness and more cops should be installed instead of the speed governors.  “It is not necessary that only high speed leads to accidents. Negligence is the main culprit. More cops should be stationed around so that if something happens, quick action can be taken. Why don’t we have more riding and driving schools in India to promote awareness?’’ he said.

Associate Professor of Transportation Engineering in the Department of Civil Engineering, Ashish Verma supporting the above statements added, “In Beijing and most other cities in China, two-wheelers have been completely banned in city limits and allowed only on highways inside city limits. This has solved the road accidents issue and also helped in traffic management in China. But keeping in mind that India has a huge middle class population, I would not prescribe that for us. I don’t think we need speed governors as currently, the speed limit of two-wheelers is already 60-80 kmph.”

Another biker, Arun Hilson argued that bikes with higher cc engines cannot even ride at 80 km/h speed. The rule should be implied keeping in mind the engines of the bikes. Murthaza Junaid, a biker for almost a decade now expresses that it is not the speed that leads to accidents, it the negligence. He added that the process of giving out a license is also full of flaws. “I am against speed governors because if they are limiting the speed to 80 kmph but selling 1000 cc bikes, then it makes no sense. There should be a driving school where a person gets a certificate according to his skills and then purchases a vehicle according to that. Most people don’t know how to drive or ride but simply know how to control a vehicle. Speeding never kills, it is unethical driving that kills,” he said.

While the biking enthusiasts are unhappy and protesting against the implementation of speed governors in bikes and cars, the politicians are giving it a political twist. Karnataka is soon going to be poll bound and keeping in mind any matter can be regarded as an election propaganda. MLC Puttanna, during the recent budget session, had raised this issue. He made allegations that though the Union Government had agreed to use speed governors from 19 authorised agencies, the State Government was purchasing it only from two. Apart from this he also said that while in other states, the speed governors were being sold for Rs 2,500, in Karnataka the prices were Rs 8,000-9,000.

However, Transport Minister HM Revanna, responding to the allegations said that the cost of speed governors in Karnataka was higher because they were of better quality. Meanwhile, traffic expert  Ashish Verma added that the possibility of the upcoming elections behind the purchasing od speed governors only from two agencies that too at a higher cost, can not be ignored. He said that the assembly elections in Karnataka due this year can be a major reason that the state government is giving profits to speed governor agencies. “I have no concrete knowledge of what’s happening behind the scenes. Considering the elections are around the corner, it could as well be possible”, he added.

Transport Minister HM Revanna stated that the transport department of Karnataka will request the Central government to make amendments in the existing Motor Vehicles Act. The South India Transport Council (SITCo) has passed a resolution which states, fixing of speed governors in non-transport vehicles. There was another incident, that triggered the installation of speed governors. An 11-year-old girl was killed when a biker ran into another bike while heading towards Hyderabad from Bangalore. The enraged villagers along Bullali gate along National Highway 44, blocked the highway creating a traffic jam. The villagers tied the biker to a tree before the police arrived, and also harassed three other bikers, damaging their vehicles, including a Harley Davidson. The protesting villagers have also demanded more number of speed breaker on the stretch.