@2019 - All Right Reserved. Designed and Developed by Times Life Style - Team
Top Posts
How to Choose the Best Quality Dog Food
7 Hardest Mounts to Get in World of...
3 Ways We Should Improve Food Quality Control
Best Set Up for A Combat Ready AR15
6 Tips for Choosing a Private Label Skin...
10 Basic Tips and Rules to Follow when...
Key Benefits of Keto
Cow Milk Formula vs. Goat Milk Formula
How Can Geospatial Technology Help in Business –...
8 Smart Ways to Save on a Rental...
FeaturedFitnessHealthKidney HealthLifestyle

Fatigue Can Be Early Sign Of Kidney Failure and Kidney Disease 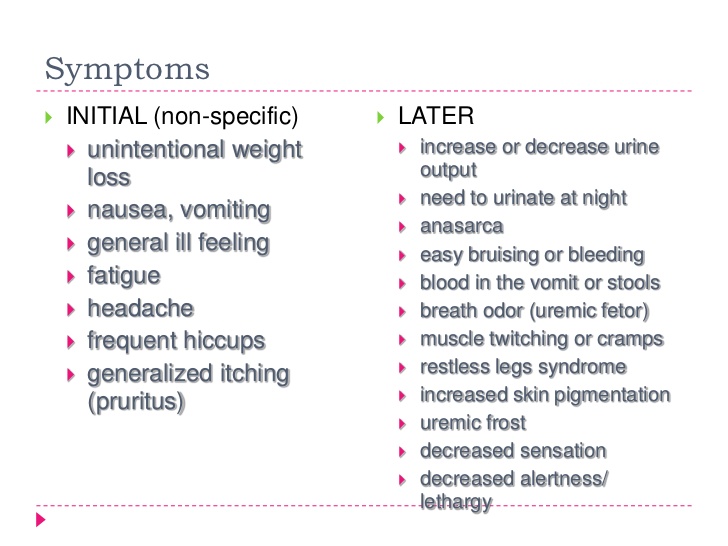 Once a person is familiarize with Kidney Disease Symptoms is easier to take all the necessary steps to avoid these increasingly frequent disease. The biggest trouble is that people tend to ignore or unrecognized due to lack of information or merely ignorance of the disease.

To help and establish which are those symptoms, here a list of the most common of them:

Fatigue – if a person feels tired all the time could be caused by some kidney failure. Kidney generates a hormone called erythropoietin (EPO) that tells the body to make oxygen-carrying red blood cells. The reduction of this hormone, it reduces as well the carrying of oxygen and your muscles and brain reflect tiredness. It is called anemia and it is treatable.

Feeling cold when others are not. This is a direct consequence of anemia.

Shortness of breath after very little effort. Due to the extra generation of fluid in the body, as well as the presence of anemia.

Feeling faint, dizzy, or weak. Another symptom related to the presence of anemia in the organism.

Trouble thinking clearly. Since anemia does not allow the good circulation of oxygen in the organism, the brain detects the shortage of the gas and this lead to generate memory or concentration issues.

Feeling very itchy. When kidney fails, they cannot remove the wastes properly, so this toxins in the blood causes severe itching

Swelling in hands and feet. Since kidneys are not removing the extra fluids generated in the body, they are presented in legs, ankles, feet, and/or hands.

Swollen or puffy face. Due to the extra fluids which are not expelled by the kidneys, face tends to swallow.

Food tastes like metal. The excess of waste material in the blood (uremia) can make food taste different and originate bad breath. It also reflects a dislike for eating with the implied lost weight

Nausea and Vomiting. As a result of uremia, nausea and vomiting are presented in a person with kidney failure. Resulting in a loss of appetite and consequently weight loss.

Getting up during the night to urinate. Since kidneys are failing and they generate urine, there would be some changes. For example, a person with this disease would urinate more often, or in greater amount than usual, with pale urine while feeling more pressure and difficulty to do it.

Foamy or bubbly urine. Since urine is originated in the kidneys, this could lead to make it foamy or bubbly, leading to an increased amount of protein above normal figures

Brown, red, or purple urine. Other changes presented in the urine could be less frequency to make it or smaller amounts than usual with a dark-colored urine and, perhaps, with blood presence.

Pressure when urinating. Since kidneys are failing, the act of urinate would become more difficult to do it and with some pressure.

Once people are informed about these symptoms, the treatment for the disease can be applied before it would too late. So it is highly recommended to have them in hand and check health conditions frequently paying a visit to a specialized doctor.

Early Stage Signs and Symptoms Of Kidney Stones You Might Ignore

9 Things to Know about Ormus Properties

Why Muscle-Building Supplements Are Becoming More Popular for...

5 Ways to Reduce the Risk of Alzheimer’s