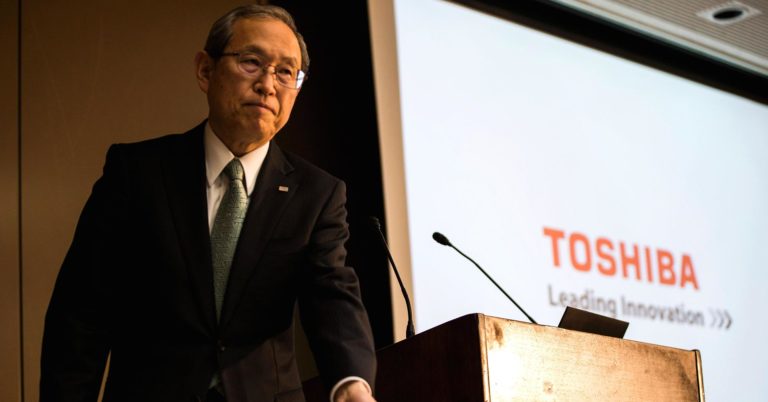 The shareholders of Toshiba Corp. have agreed to sell their memory chips division in order to make up for the Westinghouse bankruptcy. The shareholders blamed the management for the downfall of the Japanese icon.

A meeting was conducted on Thursday to vote over the issue of disposal of its prized semiconductor business. The investors seemed enraged as they hurled abuses at the executives.

The Japanese company is planning to sell a large portion of the stakes in the semiconductor sector so as to fix a balance sheet, which is currently ravaged by a debt of billions of dollars in write-downs associated with cost over-runs at the nuclear subsidiary – Westinghouse Electric.

Toshiba had bought Westinghouse for a sum of $5.4 billion in the year 2006. The company filed for a Chapter-11 protection on Wednesday. Toshiba Corp. explained it may now report a loss of about $9.1 billion (1.01 trillion yen) in March, as per a report submitted by Bloomberg.

“Toshiba is now a laughing-stock to the whole world,” said one of the shareholders during a question-and-answer session. “I think all of you are incompetent as managers. Do you even know what’s happening?” During the meeting, the executives were also addressed as “trash” by another shareholder.

After the shareholders finally agreed to the sale of the chip division, the multinational corporation said it has received quite a few offers for its NAND memory sector. This is expected to restore the shareholder’s equity by the next fiscal year. The bids are expected to begin on Thursday; around ten companies have shown interest in the semiconductor deal.

Toshiba’s crown jewel happens to be its semiconductor business. The company makes memory chips that are used in smartphones, data centers, and computers. During the last fiscal year, the semiconductor sector accounted for 25 percent of its 5.67 trillion-yen revenue.

However, this year, the shares of the Japanese company have slumped by 20 percent after advancing 13 percent in the year 2016. On Thursday, the stock trade saw a 4 percent rise in Tokyo.

The company’s Chief Executive Officer (CEO) Satoshi Tsunakawa began the Thursday’s meet by apologizing and reassuring to the shareholders. He said the company would leave no stone unturned to prevent de-listing after missing the earnings reporting deadlines. However, investors didn’t seem pleased.

During the question-and-answer session at the proceeding, one of the shareholders said, “It doesn’t seem like the management is taking this seriously enough. Whatever happened happened. I want to know what happens next.”