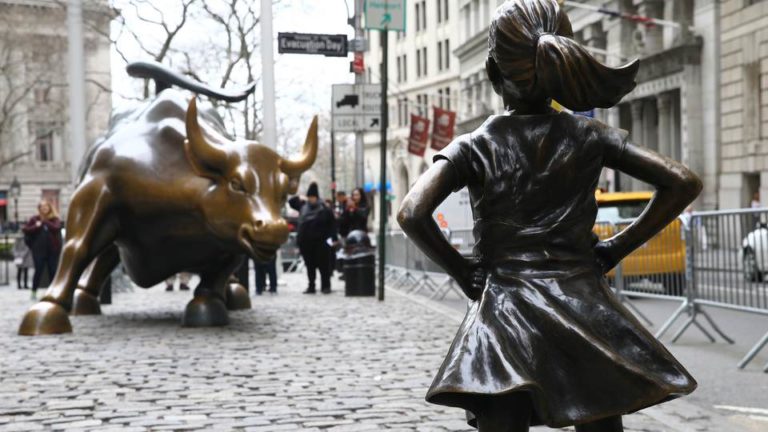 A question arises in everyone’s mind. Will the sculpture of the Fearless Girl have the same kind of impact if she wasn’t right in front of the Charging Bull sculpture?

Arturo Di Modica, the sculptor of the bull, thinks that she wouldn’t and he has even hired some lawyers for helping him in making his case. In a Wednesday’s news conference in NYC, the man behind the bronze bull that is iconic ally established near the NYSE said that the young girl’s statue installed just a few feet away from the bull last month, staring so boldly at the 7100 pound beast created by him is against his artistic copyright.

Di Modica’s lawyer, Steven Hyman said that the girl is a sculpture on her own, but when you use it with the charging bull, it changes the symbolism of the bull completely.

Di Modica, an Italian artist resident of both Sicily and New York, created the charging bull after the stock market crash of 1987. The symbolic bull showed power and strength of the American people. It was installed dead of the night in 1989 in front of NYSE and was later moved a few blocks away to a nearby park where it became a piece of art that drew a lot of tourists.

State Street Global Advisors, Boston’s State Street Corp.’s $2.5 trillion arm, installed Kristen Visbal’s creation, the Fearless Girl with hands on hips dead of the night last month. The reason for this was part of State Street’s move of pressing companies to have more women directors and make up an investment fund for companies that had a diverse team of directors.

Hyman said that they have taken Di Modica’s bull and made it into their own piece of art, which cannot be done without Di Modica’s permission, said Hyman.

Di Modica sent letters to NYC Mayer Bill De Blasio and State Street and the NY advertising agency too wanting immediate removal of the fearless girl and demanding the financial damages caused by the art.

Passionate reactions were sparked because of the dueling statues. Hundreds of tweets defended the Fearless Girl and some called the statue fake corporate feminism too.

On Wednesday, De Blasio tweeted that the reason New York needs the Fearless Girl is because of men who don’t like the women taking up their space.

A Somerville artist, Laura Baring-Gould whose public artworks include Dorchester’s Clapp’s Favorite Pear said that she can understand the frustration of Di Modica.

She said that you put your entire energy and enthusiasm into something and once you have to let it be in public, see what happens.

So far, the artist hasn’t filed a suit against NYC or State Street. The purpose of him sending letters first is to see if something could be worked out before the legal system is involved.