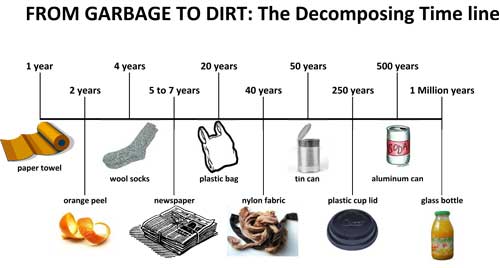 The wastes take a considerable amount of time to get decompose and out of them, the plastic wastes consume most of the time, approximately 10 to 100 years.

We can say that plastics are not biodegradable wastes they actually break down into smaller particles or persists anaerobically. The waste materials require oxygen for go with the process of composting waste, that is, the waste composts aerobically but in the landfills, oxygen is absent as they are considered to be airtight areas so the waste breakdowns anaerobically.

Basically, the food scraps are biodegraded by the bacteria after they are buried into the soil and they are advantageous to the soil as they play an important role towards soil fertility.

“The compostable wastes are much better than the conventional one”

Production of plastic till date: 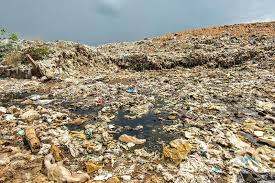 One genuine way to break down plastic is photodegradation. It is a process which does not require bacteria instead the UV rays decompose the plastic into small pieces when the plastic waste is brought into contact with the rays.

Scientist’s discovery for the elimination of plastic waste:

A mutant enzyme named PETase has been recently discovered that too accidentally, which can help us to get rid of plastic waste slowly but effectively. The enzyme is so named because it eats up the light weighed plastics which are basically used in soft drinks and water bottles. The plastic is known as Polyethylene terephthalate which is abbreviated as PET.

The mutant enzyme discovered by the scientists is still in its early age and at present, it can only recycle the plastic bottles and turn them into optic fiber. The optic fiber so produced can be used in making of clothes and carpets.

Different food materials require a different amount of time, that is, the time of decompositions varies from one food item to another. An orange peel takes about 6 months to decompose whereas a banana peel or an apple core only need 30 days to decompose.

It is reusable as it is made up of sand. It can be broken down and melted and carved into a new glass but once it is thrown away in landfills it takes a billion of years to decompose.

Papers can be easily recycled and reused. It is a way to get rid of a lot of landfill space but once they are to be decomposed anaerobically, they require 2 to 6 weeks of time to decompose.

We need to reduce the adverse impact of the waste on the planet and not just decompose it. So, everyone around should take a step to reduce their part of waste by using fewer plastics and more reusable items.