The Quacquarelli Symonds (QS) Asia University Rankings have been released and the top position in the list was held by National University of Singapore. It was immediately followed by The University of Hong Kong. The list also showed the third place being shared by two the Universities namely, Nanyang Technological University, Singapore and Tsinghua University, China.

The top ten Asian Universities according to the QS Asia University Rankings: 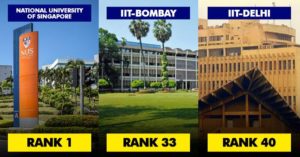 The report show the rankings from India to have been improved compared to previous year. The top University from India was IIT Bombay placed at 33rd rank in QS Asia list, followed by IIT Delhi and IIT Madras with a rank of 40 and 48. IIT Bombay was at the 34th position in the last year’s ranking.