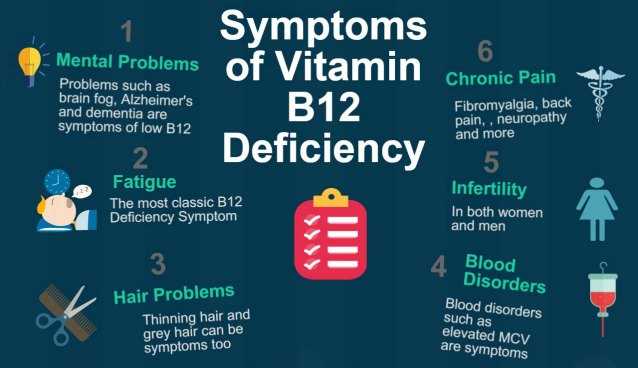 Vitamin B12 is also called cobalamin and it is a substance that can be dissolved in water. It has an important participation in the red blood cell production and DNA, and assuring the proper functioning of the nervous system. It can be naturally found in animal foods such as meat, poultry, eggs and dairy and in some fortified products with this element found in the market like some sorts of bread and plant-based milk, for example.

But lack of information and a deficient diet originates an insufficient supply of vitamin B12 especially in senior citizens. Besides elderly, other people at risk of this vitamin deficiency are:

Most of the symptoms this vitamin insufficiency could take long time to show up, making the identification of this malady somehow complex. Some of the signs and symptoms of a real deficiency in vitamin B12 are:

A pale look is one of the indicators of deficiency in vitamin B12. Red blood cell production is affected by this condition, as being the transporters of oxygen through the body: This element provides the good healthy look in the face, so a lacking of oxygen due to the insufficiency of Vitamin B12 would be reflected in the organism with a pale skin color and the possible presence of anemia.

A sensation of fatigue and weakness is originated when the levels of vitamin B12 are low. The reduction of red blood cells, which moves oxygen through the organism, creates the fatigue and tiredness.

The lack of vitamin B12 affects directly the nervous system, due to the contribution to the metabolism of the body producer of myelin, which surrounds the nerves protecting and insulating them. If vitamin B12 is scarce, so are levels of myelin and the resulting feeling is like pins or needles exerting pressure in the whole body.

Lacking vitamin B12 would lead to an inflammation of the tongue with color and shape changes. Also, a change in the speech can be watched. Besides it, other oral symptoms can be shown such as ulcers in the mouth along with the pin and needle sensation in the buccal area.

Since red blood cells are low and the oxygen requires by the body for any activity is scarce too, the result is reflected in breathing and in the presence of unsteadiness much frequently.

Since the malfunction of red blood cell production by lacking the support of vitamin B12, hence the lack of oxygen generated by this low cell levels, would lead to the disruption of the nervous signals send to the brain originating an impaired vision condition.

Deficiency in this substance originates disorders such as depression and dementia when the deficiency is really critical. Although, the origins of these conditions can be linked to many other factors different from vitamin B12 deficiency; but the insufficiency of the substance should not be ruled out as one of the generators of those mental conditions.

A very uncommon symptom of the deficiency of this substance is the presence of high temperatures. There is not clear indicator of why this happens, and these temperatures can be linked to illness, no the lacking of the substance.

Although difficult to identify, the presence of several of the signs and symptoms described above would be an alarming call and a specialist should be visited to solve this situation.