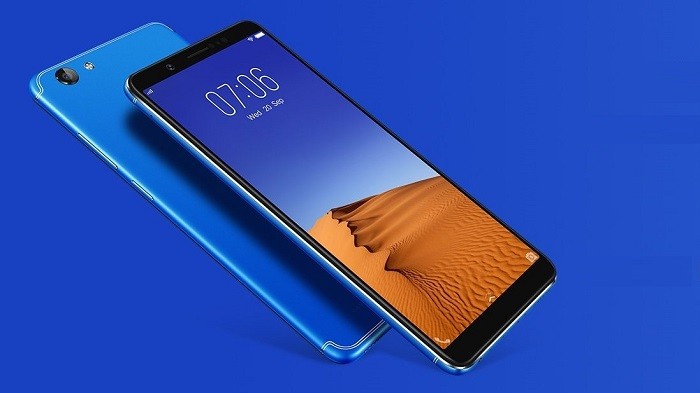 The new from the selfie line in Vivo is the V7+, succeeding the V5 Plus. This time around the company has decided to drop the secondary frontal camera in favor of a single camera with much higher resolution.

But that is not all, it has also increased the display to 18:9 and thus, keeping in touch with the modern devices.

The Phone has a nice built and it feels great on the hand, slim and light, a depth of 7.7mm comfortable to carry around in your pocket, ergonomically good to grip. It comes with a standard phone jack and a MicroUSB port.

On the left, on the phone, you’ll find the SIM tray for two Nano SIM cards, and a MicroSD card for up to 256GB, which is a welcome feature amongst fans of the brand since the last one lack the option to expand its memory storage. Both volume and power buttons are on the right side, one thing missing for making it a perfect phone is a USB-C port. And another thing missing, from a Smartphone with an 18:9 Display is a low resolution of 720×1440, which compared to competitors is a major downside, that being said the colors have a nice saturation and clear viewing from every angle.

It comes with a fingerprint sensor located just above the Vivo logo and has a very quick verification response, as well as use it to lock certain apps or to quickly get a selfie.

The V7+ uses the best of the best, powered by a Qualcomm Snapdragon 450 using 8 ARM Cortex-A53 cores, and Qualcomm powered Adreno 506 GPU. This time around the Vivo V7+ has an amazing handle over multitasking, seemingly smooth and an excellent gaming performance, also 4GB RAM and an internal storage of 64GB, not great, but pretty darn good, especially when compared to other competitors.

The Vivo V7+ comes with Android 7.1 and place on top, Vivo’s own custom UI the Funtouch OS 3.2 and it features something called Smart Split, which allows you to run duplicates of apps, thus allowing for multiple accounts simultaneously open.

In general terms, this UI runs very smoothly, although it may be difficult at first to find the apps you are looking for, it really takes some time getting to know how it works, but other than that, it is perfect.

The Vivo V7+ has a very decent overall performance, and any reviewer has found performances issues with it, so that is a definite plus if considering purchasing one of this bad boys.

The phone is more than capable of handling 1080p video files anything higher than that or 4K and it just won’t run. The speaker is loud, lacking some audio quality, but it does support DAC when paired with great earbuds can give you a unique experience.

But, as we all know, or should know, is that Vivo lives for the frontal camera, and this time, the Vivo V7+ comes with a 24MP sensor a major upgrade compared to previous entries.