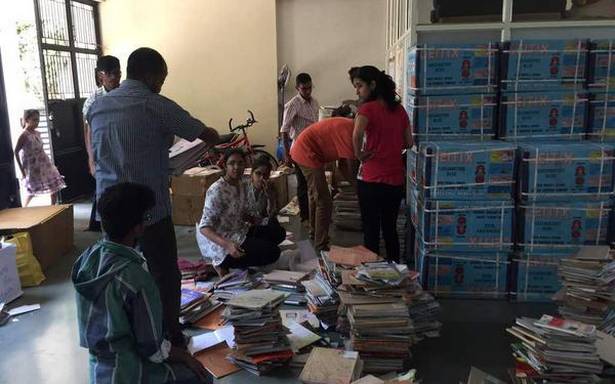 It is March and the school sessions will soon be over for this academic year. With the beginning of the new session, new books and notebooks replace the old ones. Generally, nobody gives a thought to what happens to the old books. They are either discarded in the dustbin or dust envelops over them in some corner of the house. According to a study around 200 crores, unused books are wasted every year in Karnataka. The books can be reused without much of recycling. It can be given to poor children but the notebooks once dumped are of no use and many of them still have many unused pages left in them.

Well, this is not the case in Karnataka anymore. An NGO named ‘Youth For Seva’ began a campaign last year, ‘Give Paper Back’ to save these pages and reuse them. This is the second year of the NGO. As per the recorded data of last year, volunteers had collected almost 35,000 books that were discarded. These books were then distributed to the poor and underprivileged children. The NGO also runs another campaign named ‘School Kit Drive’. Giving further details about the project, Bhargavi Nagabhushan, the Bengaluru project coordinator for Youth for Seva, said, “We have another project, ‘School Kit Drive’, through which we provide school bags, geometrical instruments and notebooks to underprivileged children. The government gives them textbooks. Through the Give Paper Back initiative, we will now be able to procure the required notebooks.” She added that the project last year covered, Sirsi, Tumakuru, Hassan, Chikkamagaluru, Belagavi, Mysuru, Mandya and Hubballi districts. She also informed that other than these districts, citizens of Davangere district has also shown interest in the project.

This year the organisation is aiming to collect at least 1.5 lakh notebooks, which are discarded, rebound them and distribute them in government schools in rural areas. Another volunteer from south Bangalore, Karthik S. said, “children usually use half a notebook, the rest is blank. We segregate the used and unused pages, bind the blank ones together and distribute them to students in rural government schools. Some schools voluntarily drop notebooks into the carton box we have kept there after exams. In south Bengaluru alone, some 15 schools have shown a positive response.”

According to the volunteers, the cost of recycling is not very high, whereas the cost of a new notebook costs at least Rs 20. If anyone wishes to contribute to this noble cause can get in touch with Bhargavi Nagabhushan at 7337813526. You can also reach out to the volunteers at [email protected]