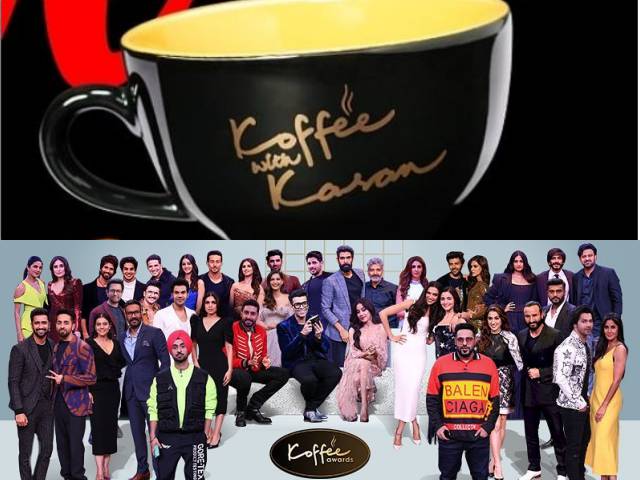 The most popular and loved talk show Koffee with Karan season 6 has finally come to its climax on Sunday. This season of the show was the most relished one among the audience. This season gave the limelight to many debutants while calling upon the most interesting personalities of the B-Town.

To everyone’s surprise, the last episode of Koffee with Karan Season 6 was opened by comedian Vir Das instead of the host Karan Johar. He left no stone unturned to kill the audience with his wit and . His monologue got all the viewers to chuckle. Vir took a dig on both the host Karan Johar and Bollywood.

Vir Das referred to the show with karan as the of Bollywood as the star kids were called as guests almost every week. He also went on to discuss the spellings of Coffee in the name of the show. He revealed the chats of the celebrities during the commercials as well.

The last episode of the show was basically an Award night with the jury consisting of Malaika Arora, Kirron Kher, Vir Das and Mallika Dua. The Vir Das and Kirron Kher duo rocked the show with their sassy best. While Vir Das entertained the viewers with his comedy, Kirron Kher had some serious opinions about the lingo used these days.

Kirron Kher left no chance in pulling the host’s legs for the fashion sense he showed on the World television. She gave a tough competition to Vir Das and they both just stole the Koffee with Karan award night.

And the Award goes to….

The best debut male award was taken home by Diljit Dosanjh. His simplicity and innocence were the qualities which won him the honour. Among Sara Ali Khan, Bhumi Pednekar and Rhea Kapoor, Sara won the best debut female award.

Out of Ranveer Singh, Vicky Kaushal, Saif Ali Khan, Sidharth Malhotra Shahid Kapoor, Vicky Kaushal emerged as the clear winner for the best-dressed male while the best dressed female award was taken home by Kareena Kapoor Khan. Ranveer Singh won the award for the best moment of the Koffee with Karan season 6 for his mimicry of Akshay Kumar.

Kajol won the award for the best performance female while the male best performer was Ranveer Singh. The northern lads Diljit Dosanjh and Badshah won the award for the best episode of season 6.. Priyanka Chopra has attended all the six seasons of the show and hence received the lifetime achievement award. Among the other nominees were Shahid Kapoor and Kareena Kapoor Khan.

The Wit and Humor

The confusion among the jury regarding top 2 nominees was the wittiest moment. To which Kirron Kher suggested giving the award to the top two. Vir interpreted it as breaking the award which is the mug and the saucer, among the two winners. But that was not the case and Kirron explained that she meant giving two different awards to the different winners.

The most Awaited Award of the Season

The answer of the Season award was taken by Ajay Devgn and won the Audi A5. He was asked about the superstition he stopped believing in to which he replied, “I believed that all your film with K work till we did Kaal.” This answer won him the most prestigious award of the season. Other nominees for the award were Varun Dhawan, Priyanka Chopra Jonas, Aamir Khan.

Waiting for the Next Season

All in all, the steal of the show were Vir Das and Kirron Kher. Without them,s the show would not have been such fun. Here’s the next call for Karan to call this duo as the first guests of the next season. We can’t wait to see them together!